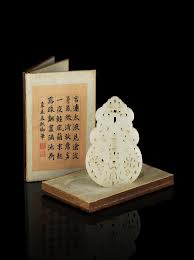 Two Chinese relics that were looted from Beijing’s Old Summer Palace, or Yuanmingyuan, in 1860 have been withdrawn from auction at Bonhams auctioneers in London.

Bonhams has removed all the information and photos of the two cultural relics from its website.

Colin Sheaf, Bonhams Asia chairman, said in a statement on Nov 2: “Bonhams is very sorry to read reports in the Chinese press that offence has been caused in China by the proposed sale of two jade carvings.”

China Daily reported on Nov 2 that China’s State Administration of Cultural Heritage, the nation’s top cultural heritage agency, slammed the auction as being “against the spirit of international conventions”.

The agency urged auctioneers to respect the feelings of people from the country where the relics were looted.

“There was never in any way an intention to cause offence, and Bonhams regrets that this interpretation has been published,” Sheaf added.

“The owner of these jades has also read the Chinese press comments, and does not wish to cause any offence in China,” Sheaf said, adding that the owner has instructed Bonhams to withdraw the two items from sale, and they have been returned to him.

“Bonhams greatly values its connections with museum specialists and government authorities in China, and has already contacted the State Administration for Cultural Heritage to seek clarification of its statement in the Chinese press,” the statement also noted.