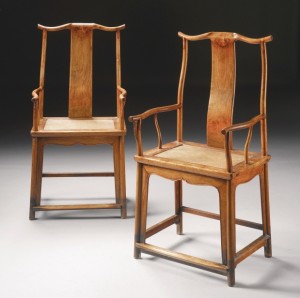 According to The Vancouver Sun, a pair of dusty armchairs, thought to be a part of the church’s decor since it opened some fifty years ago, were identified as a rare and valuable Qing Dynasty treasure.

The discovery, made by an antique-furniture buff who visited the church two years ago, may prove to help the church out of the financial troubles it has been facing when the chairs go on auction at Sotheby’s in New York next month.

They’d been there, in a quiet spot along the back wall of the St. Matthias Anglican Church in Victoria, possibly since the parish opened the doors of its new home nearly 50 years ago.

Now the church is poised for a potential windfall when the chairs are auctioned next month in New York, where Sotheby’s expects the matching set to fetch as much as a quarter of a million dollars at a Sept. 11 sale of Chinese ceramics and works of art.

An antique-furniture buff’s fortuitous visit to the church two years ago for a Bible study session led to the identification of the chairs as treasures expertly crafted in 17th-century China before making their way somehow – thanks to a long-forgotten donor evidently unaware of their significance – to the Vancouver Island parish.

“It’s quite an astonishing turn of events,” said rector Rev. Robert Arril, who often sat for a moment in the 300-year-old chairs, enjoying the luxurious warmth of the huanghuali wood, an extremely rare Chinese rosewood.

“We’re a benevolent presence in the community. What these chairs mean is that we’ll be able to carry on.”

In the fall of 2010, he held a Bible study group for about 15 people, huddled in their coats, in the nave of the cold church.

“I remember very distinctly looking up and I noticed that only one person seemed to be looking at me very intently. And I thought, ‘At least one person is listening.’ And she wasn’t,” said Arril with a laugh.

“She wasn’t looking at me at all. She was looking at the chair I was sitting on. And what she was thinking was, ‘I wonder if that could be a knock-off of a 17th-century huanghuali yoke-back Chinese chair.’ ”

The parishioner, an aficionado of Oriental antiques who prefers to remain anonymous, assumed the chairs were fake. But about a year later, as the church’s financial problems continued, she asked Arril if she could photograph the chairs and take a small wood sample.

“I helped her take one of them outside and turn it over,” Arril said. “At that moment, there was an intake of breath, because she saw the feet, which were very worn. The probability was growing that these were authentic.

Barry Till, curator of Asian Art at the Art Gallery of Greater Victoria, looked at the photographs and gave the church a list of people to contact.

“As they went up the line from Bonhams, to Christie’s and Sotheby’s, the value kept going up and up,” Till said.

“They are very unassuming chairs, with the beautiful simpleness of the Ming period,” he said. “It’s a great discovery. It would make most museums very happy to have something like that.”

In the meantime, Arril moved the chairs for safekeeping and started to investigate where they had come from. He looked at diocesan archives and church records, struck a committee, published inquiries in the church bulletin and talked with those who had left the congregation. The only verification was a 1992 inventory from a local auction house assessing their value at a couple of thousand dollars.

“We have a mystery on our hands,” Arril said. “We don’t know where they came from. We have done due diligence, and we came up empty-handed.”

Harold Yeo, Sotheby’s New York specialist in Chinese works of art, was first contacted about the chairs in March and came to Victoria in early May.

“It’s a nice discovery,” Yeo said. “You don’t expect to find Ming chairs in Victoria. I saw them in a room where the sunshine was coming in and the wood gave off a beautiful golden glow.”

About eight months ago, Sotheby’s sold a similar pair of chairs for $2.7 million.

“That was unusual,” Yeo said. “There were two people who really wanted them and wouldn’t let go.”

Asian art expert Lark Mason of the Antiques Roadshow television show said it was a shock to get a call from someone in Victoria, especially when it became apparent the chairs were significant. He went to see the chairs at Sotheby’s.

“They are wonderful,” he said in a phone call from New York. “The lines are terrific. They are very attractive, good examples from the 17th century, in excellent condition. The wood is extraordinarily attractive. Whoever was the original owner knew what they were doing when they bought these in China.

“I’m anticipating these will do extremely well.”