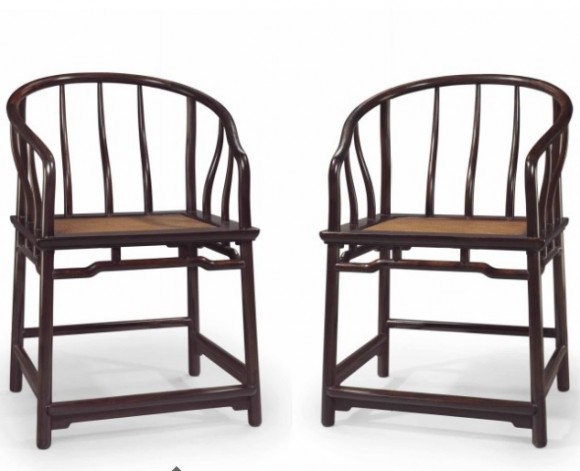 Each has a generously proportioned five-section curving top rail continuing through the arms to merge with the front posts. The top rail is supported at the sides and back by seven ‘goose-neck’ posts and two curved rear stiles continuing through the frame to form conforming circular-section legs. The soft mat seat is set within a rectangular frame above the humped stretchers with pillar-shaped struts. The rounded legs are joined by stepped stretchers and footrest above the feet. 36 1/16 in. (91.7 cm.) high, 25 in. (63.5 cm.) wide, 22 7/8 in. (58.1 cm.) deep (2)

What distinguishes the current pair of chairs from other horseshoe-back armchairs is the elegant substitution of the more traditional backsplat with three circular-section curved backposts, echoing the grace of the open construction more often seen in low-back armchairs. The use of vertical rungs in horseshoe-back armchairs is extremely rare and no other examples appear to have been published, with the exception of a nearly identical pair of huanghuali armchairs in the Hung Collection, illustrated by R. Hatfield Ellsworth, N. Grindley and Anita Christy, Chinese Furniture – One Hundred Examples from the Mimi and Raymond Hung Collection, New York, 1996, p. 79, no. 19.

Several examples of zitan horseshoe-back armchairs have been published including a pair in the Liang Yi Collection, illustrated by C. Evarts, Liang Yi Collection – Zitan, Hong Kong, 2007, p. 44, no. 8. Another pair is illustrated by My Humble House, Zitan, The Most Noble Hardwood, Taiwan, 1996, pp. 39-41; and a single example illustrated by Nancy Berliner in Beyond the Screen: Chinese Furniture of the 16th and 17th Centuries, Boston, 1996, p. 113, no. 11, also dated 17th/18th Century.

The Chinese name for this type of chair, quanyi, is literally translated as ‘chair with a circular back’ or ‘circle chair’. During the Song dynasty (960-1279) this form was known as kaolaoyang, which refers to a large round basket made from split bamboo. The English name for this form, however, refers to the overall shape of the back and arm rests, which resembles a horseshoe. Wang Shixiang and Curtis Evarts have suggested that the horseshoe-back armchair emerged simultaneously with other examples of high-back chairs during the Tang (618-907) and Song (960-1279) dynasties. See, Wang Shixiang and Curtis Evarts, Masterpieces from the Museum of Classical Chinese Furniture, Chicago and San Francisco, 1995, p. 56, for a further discussion of the form.

An illustrated early example of the horseshoe-back chair in a woodblock print is included in the Lu Ban Jing (Classic of Lu Ban) but is utilized as a sedan-chair. The Lu Ban Jing is a Ming dynasty carpenter’s manual that contains a significant amount of information describing the forms of popular furniture during that era. However, the text and its importance go far beyond that, as described by Craig Clunas in “Klaas Ruitenbeek’s Lu Ban Jing,” Journal of The Classical Chinese Furniture Society, Winter, 1993, pp. 30-32. Clunas explains that the Classic of Lu Ban “is a carpenter’s manual, dealing not only with the technical aspects of building construction and of furniture-making, but with what might broadly be called the ritual and magical aspects of the craft.”

The crest rail of this type of chair also ingeniously and elegantly functions as the armrest. Wang Shixiang explains in, Connoisseurship of Chinese Furniture, vol. I, Hong Kong, 1990, p. 43, that the “crest rail is made of several sections which comfortably support both the elbow and the upper arm. The crest rail is constructed from three or five segments. A three-section crest rail is called a sanquan, a five-section one is called a wuquan. The three-section crest rail requires two fewer joints but requires larger members because of the wider curve.” The crestrail of the present pair of chairs is constructed from five segments. For a detailed description and explanation of the sophisticated joinery utilized by the Chinese craftsmen to construct the curved rails of the elegant and graceful horseshoe-back armchair, see Curtis Evarts, “Continuous Horseshoe Arms And Half-Lapped Pressure Peg Joins,” Journal of The Classical Chinese Furniture Society, Spring, 1991, pp. 14-18.