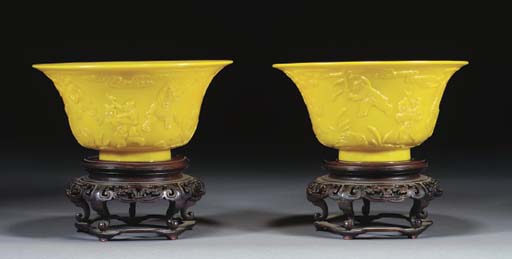 Glass was first made in China around 300 BC.

Peking glass however came about during the Kangxi reign, when a glass-works was established in the forbidden city (1696).

The new glass was commonly used to make vases and snuff bottles, to replace jade, lapis lazuli and other precious stones.

Snuff bottles were made in huge numbers for imperial gifts.

Jesuit missionaries had introduced glass making techniques from Italy. Kangxi appointed two Jesuits to run the imperial glass workshops. They sent to Europe for chemicals to dye the glass and were supervising the enameling of western scenes onto the glass.

Eventually the process of making Peking glass spread out of the imperial glass-works (Zaobanchu) and into the public domain, which led to artisans copying the Peking glass method.

The golden age of Peking glass was in the reign of the Kangxi emperor and started to decline afterwards, the art form carried on through the republican period and into the present day.

Peking glass is an overlay carved glass created by layering molten glass around a core. To create the overlay the glass blower makes the shape, then dips it into a bowl of liquid glass, he does this several time. Thus creating multiple layers of glass, often of different colours, which create a contrasting image when carved.

Through the Looking Glass

Put all ingredients except the lemon peel into a mixing glass, stir and strain into a cocktail glass, garnish with a lemon peel. Enjoy!