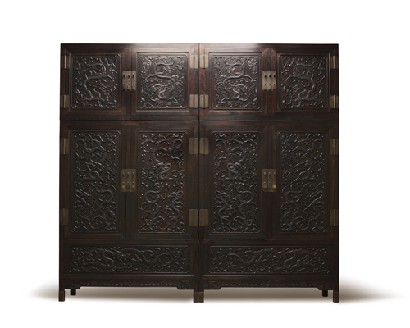 A rare wooden cabinet that was part of the Chinese imperial collection has sold for over 90 million yuan at an auction in Beijing. The sale sets a new record for Chinese furniture.

Another big night for Beijing’s Poly Auction House. With a starting price of a cool 28 million Yuan, this piece fetched a staggering 81 million, or 93 million with the commission fee.

The imposing three-metre high piece comprises four parts with finely carved dragons and lotuses on its doors. The high price is attributed to the fact that it is made from zitan, a rare dark tropical wood traditionally reserved for the emperor. The piece dates from the reign of Emperor Qianlong, over 200 years ago. The period is regarded as the golden age of Chinese civilisation and the height of the Qing Dynasty.

“This is a unique piece of imperial furniture. It would have been placed beside the golden throne of the emperor and was probably part of a pair,” said Li Yizhou, Poly Auction’s manager of the antiques department.

Demand from Chinese collectors in recent years has encouraged a surge in the price of furniture and other items made from rare wood like zitan and huanghuali. Experts estimate there are fewer than 10,000 huanghuali items left in the world.

The Poly Auction is one of the largest auction houses in China. Its annual Spring Sale has seen huge success since opening last week, with the trend looking set to continue.