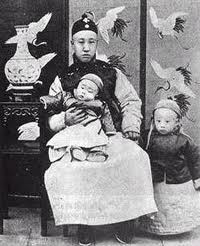 All imperial princes lived in Beijing and required the Emperor’s consent to travel from the capital. The Emperor controlled virtually every aspect of their lives. Princes could not marry or give their daughters in marriage without the Emperor’s approval. When they died, the heirs to their princely titles had to be confirmed by the Emperor, who turned back successors who did not demonstrate proper conduct and values. By these measures, the Kangxi, Yongzheng and Qianlong Emperors turned a hereditary nobility into a service nobility.

Most Han Chinese dynasties, including the Ming, designated the eldest son of the Empress as the heir apparent or crown prince. The Manchus did not have this tradition. Ming rules provided predictable and stable succession by fixing the procedure for naming an heir, designating this heir when he was very young, and removing all other sons from the capital to the provinces, where each was provided with an estate. The Manchus inherited the Inner Asian tradition which selected leaders on the basis of merit rather than birth order or the status of the birth mother: in theory and in practice, all sons were eligible to succeed as Emperor.

It seemed that the Kangxi Emperor would establish the Ming practice as precedent for the Manchu ruling house, but in 1708 the Emperor disinherited Yinreng after accusing him of an attempt on his father’s life. Reconciliation (1709) and restoration to the heirship proved to be temporary; in 1712, Yinreng was again disinherited and placed under confinement. Despite passionate appeals by several officials, the Kangxi Emperor refused to name another heir until his deathbed.

Beyond Yinreng’s own behaviour – the records say that he ‘indulged in immoral practices’ and associated with men of ‘evil character’ – lie more fundamental reasons that were inherent in the institutional mechanisms that the Kangxi Emperor had created. The Empress was always selected from powerful families at court, and her male kinsmen could use their relationship to the heir apparent to pursue their own aggrandizement. The Emperor was very watchful lest a faction of officials coalesce around the heir, creating a clique at court that weakened his own personal control. Removing Yinreng as heir apparent, however, stimulated the outbreak of open discord among the Kangxi Emperor’s other sons. Factions formed around several who were especially ambitious, and eventually eight more of the Emperor’s twenty sons were punished for their actions. The oldest, Yinshi, was stripped of his princedom in 1708 for using sorcery against Yinreng. He died in confinement as did his full brother Yinzhi.

The repudiation of the Ming system of succession was to be permanent. Yinzhen, whose ascent to the throne upon the Kangxi Emperor’s death in 1722 was tainted by rumours that his father’s will had been fabricated, continued on the course set by his father. To satisfy those pressing him to stabilize the realm by naming an heir, Yinzhen devised the system of ‘secret succession’ which was followed by his successors throughout the rest of the Qing dynasty. He wrote the name of his heir and sealed the edict in a casket that he placed in the rafters in the Qianqing palace, to be opened only after his death.