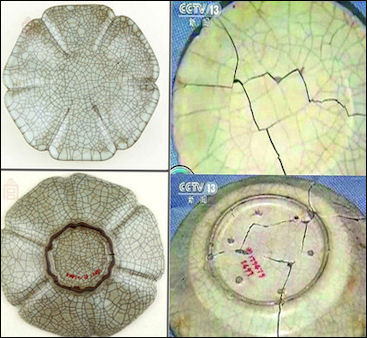 The Palace Museum in Beijing has confirmed that a priceless porcelain dish dating from the Song Dynasty (960-1279) has been broken. Long Can disclosed on Sina Weibo, China’s equivalent of Twitter that an item of Ge porcelain ware, one of 1,106 pieces of first-grade porcelain in the Palace Museum, was broken into six pieces by a staff worker, according to Jinghua Times in Beijing. [Source: J. L. Young, Want China Times, July 31, 2011, Leo Lewis, Times of London, August 2011]

After the message was posted on Weibo, it was reposted by tens of thousands of netizens over the course of a few hours. Following this, the museum made an announcement that the porcelain ware was broken into six pieces by a staff worker who was doing non-destructive analysis and testing. The plate was in the jaws of precision testing which the worker accidently programmed to squeeze too hard. The announcement also said that right after the incident happened, all the testing works were stopped and the incident was reported to the authority. Many netizens suspected that the museum intended to conceal the fact, not wishing for a repeat of the embarassment when a thief made off with a number of watches from a visiting exhibition.

The broken work was a celadon-glazed masterpiece from the Fe Kiln. The worker who broke its is said to have a Master’s degree and seven years experience in the labratory. Experts in Chinese antiques have estimated that the price of a well-preserved porcelain ware from Ge kiln is worth over 100 million yuan (US$15,530,000). In a 2008 auction at Sotheby’s in Hong Kong, a Ge porcelain counterfeited during the Qing Dynasty (1644-1912) was sold for 3.28 million yuan (US$509,710).