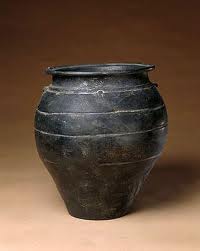 Among primitive Chinese ceramics black earthenware also attained considerable refinement, both in technique and artistically. Black pottery first appeared around 2000 BC and was based on coloured pottery. Black pottery was created during the transitional period from primitive society to slave society in China. Be it religious or ancestral rituals, everything at that time was developing towards a more standardized and systematic structure. Members of society had a clearer differentiation of social status, and political and economic interests also needed to be systematically distributed among them.

The clay used for black pottery, like the material for coloured pottery, was of the finest quality. Though black earthenware was still handmade, most was produced on a fast potter’s wheel (kick wheel), and improvement on its slow counterpart from the coloured pottery period. The use of paddles to shape the clay was also quite common. Aside from a small quantity of pottery and the different attached parts such as the mouths, handles, and support, which were still formed by hand, the main body of most pottery vessels was crafted using a potter’s wheel. This not only has the advantage of producing more uniform and consistent shapes, the thickness of the pottery can also be controlled more precisely. This allowed black pottery vessels, with their eggshell-thin bodies, to be made without difficult. The surface of black pottery had a polished finish, produced by pressing and polishing the surface of the almost dry unfired body with pebbles or tools of bone. When the body was fired, its exterior became glossy. Coloured pottery also received such a treatment before patterns were painted. Black pottery was the next step in developing this technique.

The emergence of black pottery was closely related to changes in firing technology and kiln atmosphere. Pottery made from iron-rich clay would produce red or brown colours when fired in an oxidizing atmosphere, or would turn black in a reducing atmosphere. The primitive firing technique required heating the kiln to the required temperature and blocking the flue. Thus the kiln would be sufficiently deficient of oxygen for iron in the clay to be reduced, causing the pottery to turn black. Since such a technique required a higher kiln temperature and a level of control over the degree of heating, it is clear that the kiln technology had advanced considerably by this time. Experimental measurements have shown that kilns producing black pottery could reach maturing temperatures of 1000 °C, while coloured potteries were fired at temperatures roughly 800 °C.

Black pottery, which benefited from finer clay, the fast potter’s wheel, and advanced firing techniques, stood apart from other styles of pottery. Better firing brought improved vitrification of the clay material, which in turn increased the strength of the body. The fast potter’s wheel not only produced thinner and more uniform bodies, but also made possible numerous forms and shapes not seen in coloured pottery.

With developments in firing and forming techniques taking place, changes were bound to follow in the design and decorative styling pottery. From a decorative art standpoint, the surface of black pottery was not suitable for coloured decorations; its more complex shapes were also difficult to paint. In most black pottery, which was intended for practical use, a polished finish was common to enhance its beauty. Using the fast potter’s wheel and paddle, all kinds of raised or incised parallel line patterns can be applied to the surface. These marks not only served to divide the pottery object into different sections, they were also an adornment and the unique styling feature of black pottery. The excitement, passion, and wildly imaginative decoration motifs of coloured pottery gave way to orderly, sequential, and highly precise parallel line patterns. The warm colour combinations of red, black, and yellow were replaced by the unchanging, sophisticated black. The repeating parallel lines found on the black pottery, especially on goblets, were full of rhythm, melody and movement. If coloured pottery represents passionate and impulsive beauty, then black pottery symbolizes rational aesthetics.

During the coloured pottery period, containers made for daily living were limited to jars, kettles, teapots, alms bowls, basins, vases, cups and so forth. The advent of the potter’s wheel gave life to new types of vessels during the black pottery period, including the yan for steaming foods and high-footed dou, a bowl on a stem that people could easily reach while sitting on the floor. In terms of decorations, besides the usual polished treatment, the surfaces of black pottery could be adorned with all kinds of etched patterns.