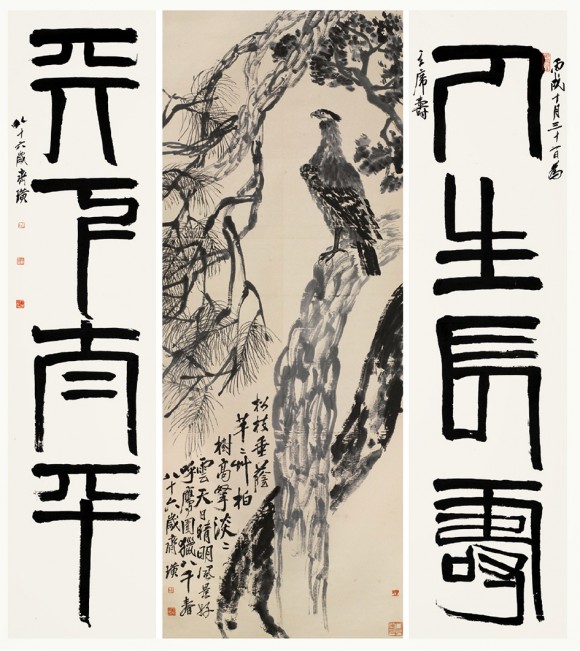 When the hammer came down at an evening auction during China Guardian’s spring sale in May 2011, “Eagle Standing on a Pine Tree,” a 1946 ink painting by Qi Baishi, one of China’s 20th-century masters, had drawn a startling price: $65.4 million. No Chinese painting had ever fetched so much at auction, and, by the end of the year, the sale appeared to have global implications, helping China surpass the United States as the world’s biggest art and auction market.

But two years after the auction, Qi Baishi’s masterpiece is still languishing in a warehouse in Beijing. The winning bidder has refused to pay for the piece since doubts were raised about its authenticity.

Qi Baishi was a master of the ordinary. In the summer of 1957, with his health deteriorating, the painter went into the studio of his traditional courtyard residence in Beijing, dabbed his brush in ink and created a portrait of a flower, a long-stemmed raspberry-and-yellow peony.

“That was the last work he completed,” said his grandson Qi Bingyi, who keeps the painting locked in a safe at his home in Beijing. “I have it right here. Do you want to see it?” he said before unrolling the work for visitors last month.

Death, however, seems to have done little to curb Qi Baishi’s productivity, according to auction records and interviews with experts and his family. They indicate that rising values and his popularity as one of China’s greatest modern painters have led to a flood of fake Qi Baishis on the market.

Liu Xilin, editor of “The Complete Works of Qi Baishi at the Beijing Fine Arts Academy,” said about half the Qi Baishi works that come up for auction in China are fake. “I can see that by just looking at their catalogs.”

In the past 20 years, works attributed to Qi Baishi have been put up for auction more than 27,000 times in China.

Qi Baishi, born in 1864 into a peasant family, herded cows and worked as a carpenter’s apprentice before taking up painting at 27. Fame came a few decades later, after he moved to Beijing and adopted a fluid, almost calligraphylike style, using an ink wash.

Scholars say he was prolific and estimate he produced between 10,000 and 15,000 works in his lifetime. Of those, about 3,000 are in the collections of major museums and some are assumed to have been destroyed during the Japanese invasion in the 1930s or during the Cultural Revolution, when Red Guards looted and occupied his family’s home.

Auction records, though, show that more than 18,000 distinctive works by Qi Baishi have been offered for sale since 1993, an impossible number, if the expert estimates are right.

In a study this year, Artron said many of China’s leading modern artists are being counterfeited, but none more so than Qi Baishi. Arnold Chang, who ran Sotheby’s Chinese painting division in the 1980s, is equally emphatic.

“There is no doubt,” he said, “that there are far more works ascribed to Qi Baishi in the market than he could have possibly painted, even with an assembly line of assistants — which he supposedly had.”

Just about every major city in China has an art dealer who claims access to high-quality Qi Baishi fakes. They are often sold as reproductions, as are many of the elaborate counterfeits created here, but experts say many of them invariably end up at auction, rebranded as the real thing.

Qi Baishi’s own family, some of them painters, aggressively promote themselves as descendants of the famous artist in order to sell their works, done in his style.

“Some distant relatives can’t even draw very well, and they go out and claim they are Qi Baishi’s family,” said Qi Binghui, a granddaughter of the artist, who is based in Beijing. “If you’re going to do something in your grandfather’s name, at least live up to his standard.”

Family members say they have been pressed to authenticate fakes, to pose for photos with pieces that might go to auction and even to mass-produce famous works by Qi Baishi.

“I can tell you I was once asked to go to Thailand to justify a batch of 20 fake paintings claimed to be my grandfather’s,” Qi Binghui said. “That person was trying to sell those fake paintings in Thailand, and he wanted me to assure the buyers that they were real.”

Concern over fake Qi Baishis is now a challenge for auction houses. China Guardian, the big auction house, says it has an enviable record of spotting fakes, and most experts agree that its reputation stands above all others. But in the spring of 2011, China Guardian marketed “Eagle Standing on a Pine Tree” as the classic masterpiece the painter had created decades earlier to honor the birthday of Chiang Kai-shek, then president.

The work was put up for sale by Liu Yiqian, a former taxi driver turned wealthy financier, who has become one of China’s largest art collectors. He sold it as a set with a calligraphic couplet Qi Baishi wrote to accompany the painting, and the auction house estimated it could bring in as much as $20 million.

On a cool evening in May, bidding on the work went back and forth for more than 30 minutes as a collector in the room jousted with someone calling in bids by telephone. When the hammer fell at a record $65.4 million, the room burst into applause.

The euphoria did not last long, though. An art critic, Mou Jianping, soon suggested that the work might be fake, and the bidder decided not to pay. Two years later, the buyer has effectively defaulted on the item.

Mr. Liu declined to comment on the failed sale.

But in an interview last month, Kou Qin, director and vice president of China Guardian, described the nonpayment problem in the market as “a very bad phenomenon,” but one that will be fought. His company reduced its nonpayment rate for the most expensive items to 17 percent last year.

“Lack of honor,” he said. “It is a problem faced by the whole of society.”