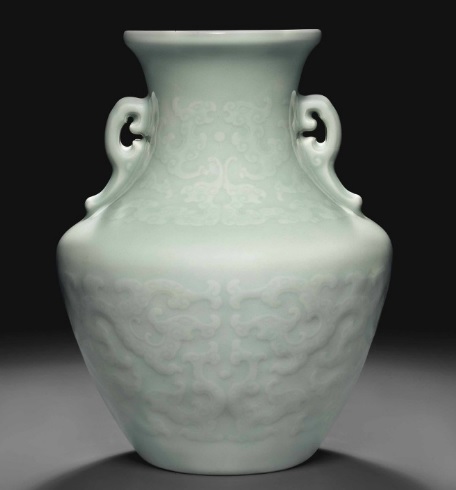 A RARE CELADON-GLAZED RELIEF-DECORATED ARCHAISTIC VASE QIANLONG SEAL MARK IN UNDERGLAZE BLUE AND OF THE PERIOD (1736-1795)
The tapering body is carved in low relief under the soft, pale blue-green glaze with a band of archaistic foliate dragons arranged in two registers, and the neck with similarly arranged archaistic birds between the pair of foliate scroll handles below the everted rim. The interior and base are similarly glazed and the mouth rim is white.
8¾ in. (22.2 cm.) high

This rare and exceptionally fine vase is a particularly successful example of the combination of archaistic style and delicately-colored celadon glaze that appears on a small number of imperial porcelain vessels in the Qianlong period. The Qianlong Emperor’s passionate interest in archaic bronzes and antiques of all types exerted an influence on the designs of all manner of works of art made for his court – in particular ceramics and metalwork – providing inspiration for both forms and decoration. The Qianlong Emperor followed the lead of the Northern Song Emperor Huizong in commissioning the publication of illustrated catalogues of his collections, such as the Shiqu baoji (Shi qu catalogue of the imperial collections); Midian zhulin (Court collection of treasures), the Tianlu linlang (Tianlu collection of masterpieces), and the Xiqing gujian (Xiqing mirror of antiquities). The latter, which was compiled in 1749, provided an especially rich source of models for porcelain production.

The basic form of the present vase obviously found favor with the emperor, particularly when combined with a celadon glaze, since a similar form, without handles, can be seen on the somewhat larger archaistic Qianlong vase from the Gordon collection sold at Christie’s New York on 24 March 2011, lot 1112. The form was inspired by Western Zhou dynasty bronzes, such as the bronze lei dated to the 9th century BC, illustrated by John A. Pope et al., Freer Chinese Bronzes, vol. 1, Washington DC, 1967, pl. 83. Interestingly, this bronze lei has handles on the shoulders and, unlike the Gordon vessel, on which handles were omitted, the current vase has handles attached to neck and shoulder, although their shape has been made more elegant by the 18th century ceramic artist. The smaller form with handles must have appealed to the Emperor, since a vase of similar size and shape, but with a crackled glaze imitating Song dynasty Ge ware, is in the Meiyintang Collection, illustrated by R. Krahl in Chinese Ceramics from the Meiyintang Collection, vol. 2, London, 1994, p. 217, no. 877. A somewhat similarly shaped early Eastern Zhou bronze vessel in the Worcester Art Museum, illustrated by M. Loehr in Ritual Vessels of Bronze Age China, New York, 1968, pp. 138-9, no. 61, which has more rounded shoulders, also has handles and has cast dragon scrolls which are precursors of the dragon scrolls on the current porcelain vase.

Interestingly, the current vase has archaistic phoenix scrolls on the upper body and archaistic dragon scrolls on the lower body. The style of these is closely linked to that seen on inlaid bronzes of the late Bronze Age, and the dragons, in particular, also display similarities to designs seen on fine silks of the same period. It is not unusual to find aspects of different periods of ancient art combined on the same porcelain vessel in the Qing dynasty. So long as they complemented each other and created a pleasingly archaistic effect, the emperor was content. This approach can also be seen in the crackled-glaze Meiyintang vase mentioned above, which has a form adopted from the Zhou dynasty and a glaze which took its inspiration from the Song dynasty.

In the 18th century the Jingdezhen imperial kilns devoted considerable research and development to the production of celadon glazes applied to a white porcelain body – as opposed to the grey stoneware bodies of the Song and Yuan dynasties. Although celadon-type glazes, colored with small quantities of iron, applied to a porcelain body, were produced at Jingdezhen in the early Ming period, the Kangxi potters perfected a particularly delicate version applied to a very white (low iron) body. The delicate celadon glaze was colored using only about half the amount of iron found in typical Longquan celadons, and was further modified in the Yongzheng period to produce an even more finely textured and slightly bluer pale celadon glaze. These celadons and the others created with minute variations in tone and texture have been much admired by Chinese connoisseurs and have been given names such as douqing (bean green) and dongqing (eastern green) in the Kangxi reign, dongqing (winter green) and fenqing (soft green) in the Yongzheng reign. These pale blue-toned celadon glazes continued to be favored in the Qianlong reign, when even more variants were added, some achieving a particularly pure tone, like that on the current vase. Indeed, the present vase is an excellent example of the decorative effect that could be created using carved low-relief decoration on the surface of a porcelain vessel under a softly translucent celadon glaze. The technique allows the details of the elaborate decoration around the body to be highlighted by the glaze running thin on the raised areas and pooling in the deeper recesses to provide a subtle contrast of color tones, thereby creating two shades of green, while accentuating the dense archaistic design. This required careful control of the fluxes in the glaze, to achieve the correct level of viscosity, and of firing temperature to ensure that the optimum quantity of fine bubbles remained suspended in the glaze to soften the sharp edges of the decoration, while still allowing it to be clearly visible.