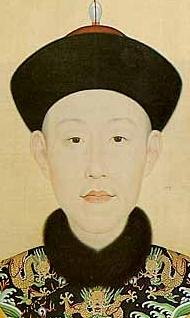 Qianlong succeeded his father Yongzheng to become the fourth emperor of the Manchu dynasty. Qianlong became known as the “Patron of the Arts and Letters”, due to his love for calligraphy, poetry, art and architecture. He wanted his name to be associated with work of the highest literary importance and ordered the members of the Hanlin Academy to compile all of the most valuable Chinese writings from the earliest times. Thirty-six thousand volumes from the Imperial and private collections were copied into a vast encyclopedia of Chinese literature, known as the Siku Quanshu. Apart from his written accomplishments, the emperor was an avid painting collector owning a mass collection, much of which can now be found at the Taiwan Museum.

The emperor was also fond of ceramic art, in particular antique pieces. He would order copies of his favourite Song Era models to be made. Sometimes he would even adorn them with poems in his own calligraphy. He had a great personal collection of no less than 400 specimens, among them many rare Guyuexuan pieces. Additionally, the Jingdezhen kiln established by emperor Kangxi was still operational at the Imperial court and continued production during Qianlong’s reign.

Parallel with the classical wares that continued throughout the century, there appeared another type of porcelain which is little known and little appreciated in Western Europe. The pottery was certainly inventive but somewhat unusual; an example would be the sedan chair vase that was produced exclusively during the Qianlong era. The “half-vase” design was created especially to be hung in a sedan chair (a type of personal carriage). The fine white body was made with clair-de-lune glaze and decorated with a stylised floral motif standing out on a background of scroll work. In the centre was a poem written by Qianlong, written in bold black characters. The poem celebrates the new wares, which are meant to inspire the sedan chair passenger to be happy, sing and gather flowers. Some would consider this 1742 design to be decadent and in bad taste, but others praise the vase as the height of avant-garde fashion of the period. 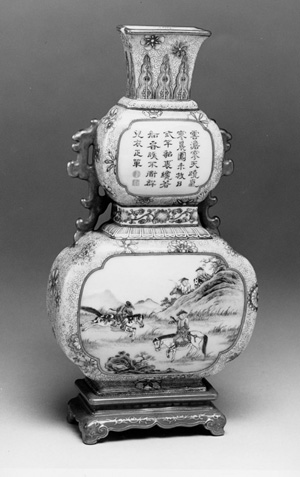 Around 1750, the taste of Qianlong arguably changed for the worse. Although the craftsmanship was as perfect as ever, the directives of the emperor were becoming more artistically dubious. Chinese porcelain started to go on a downward path. As expected, increased production led to progressive degradation of the quality. Apart from the pieces made especially for court, the porcelain started to lose its crafted, handmade beauty. The process was eventually taken over from pure craftsmen to industrial mass production, at least for the general public. The mass produced wares were unable to maintain the artistic standard. The body became heavier, shapes more massive and therefore less elegant; the glaze became greenish or grey; the brilliant red of the flowers turned violet.

Famille rose enamels were not always as delicate as the ones produced in the Yongzheng period. Pink is often used as base colour for the design, or on the backs of dishes and plates. Iron red appears in a whole delicately graded range from tomato red to vermilion; it is often used in combination with underglaze blue. A crude opaque green, called “European Green”, is used, like ruby red, on the backs of some pieces. A watery green appears in delicate landscapes. The powder blue, used sometimes as a background, is greyer and more irregular than in the preceding period. Gilding, more and more frequently resorted to, aimed at enriching the decoration but all it achieved is in fact making the piece look heavy. There are, however, some splendid pieces, like the mille fleurs vase of the Grandidier Collection in the Musée Guimet in France. The exquisite little cup with a poem by the emperor in the Percival David Foundation, or the bottle-vase decorated with glowing peonies formerly in the C.T. Loo Collection which brilliantly continue the famille rose style. The body is generally excellent in quality, white and fine-grained , especially the pieces made for the Imperial palace.

Flowers are still the main source of inspiration. Rendered in carmine red enamel, they bloom in the most varied surrounding: scrolls, garlands, rock-gardens, mille-fleurs designs. Birds, butterflies, fish and other animals like horse and deer are painted painstakingly according to the conventional models, repeated again and again with a certain virtuous execution.

Under Qianlong, porcelain producing became completely industrialised. The techniques were excellent, allowing for all kinds of aberrations: imitations of ink painting and lithography, using a pigment based on manganese, and imitations of other material such as bronze, wood, marble. These carefully elaborated inventions can achieve a trompe-l’aeil effect, but they often lack spirit and vitality.

Porcelains with European subjects evidence a certain taste for exoticism at the Imperial court at the time of Qianlong. The emperor himself set the example, attracting Italian or French painters to court and building European palaces in his residence of Yuan-ming-yuan. The Chinese often attribute works to the Jesuit Castiglione (Lang Shining in Chinese), one of the emperor’s favourite painters. However, many porcelains with this attribution is wrong and misleading; even if Castiglione gave drawing lessons to some of the artisans who wanted to copy European pictures, or directed some works, he is very unlikely himself to have painted the design of these porcelains which are inconsistent in quality. The noses and eyes are shaded in the “Western manner” but very unskilfully. Furthermore the composition is clearly Chinese. Nevertheless, the porcelains with Western subjects that were manufactured early in the century, bear the a two-character seal saying “Shining”, after Castiglione.

Though the shapes are not properly speaking new, their proportions are appreciably different. Vases were quite squat with facetted sides, the handles were inspired by animal designs. Some lidded vases are made joined together; others feature a pierced belly and can be taken apart. Trumpet vases, imitating archaic ku, have a disproportionately wide splayed mouth. Flattened gourds have very fine attachments joining the neck; bottle-vases are decorated with relief motifs (usually dragons). 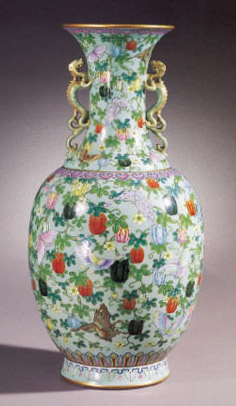 The birds painted in the Qianlong period in polychrome enamels, or in plain glaze with black and green touches, have been much appreciated in Europe since the 18th century. Pheasants, chickens, ducks, falcons and the phoenix, emblem of the empress were typical motifs and have reached very high auction prices in recent years.

The archaic seal mark really came to prominence during the Qianlong period, largely replacing the regular kaishu script. Ceramic manufacture at the Imperial kiln was enormous in the 18th century due to mass production, it has been suggested that the marks were painted only by a selected few calligraphers. The marks found on Yongzheng and Qianlong porcelain have certain recognisable handwriting. Qianlong marks are often written in iron red or gilt, as well as underglaze blue. They can also be incised, stamped or moulded in relief. On a small group of porcelain, the so-called ‘Gu yue’ wares, puce and oveglaze blue enamel marks appear. Seal marks can be found in a cartouche on the neck of a vase, where the seal has been broken up and is presented in a horizontal format from right to left. 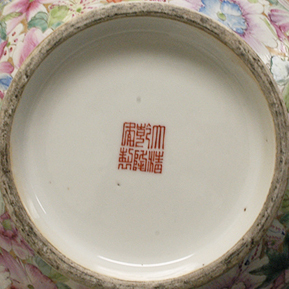 The details of the calligraphy depend on the method used to apply the mark. These details also altered from one reign to the next, and sometimes these anachronistic quirks indicate if the mark is contemporary with the period rather than being 19th century or later. For example, during the Qianlong period, the six character ‘zhi’ (manufactured) when written in underglaze blue should have a small trident with five prongs. In the copies we usually find only three prongs. In the execution of the water radical of the Qing character there are similar anomalies in style that betray a later date. In genuine pieces the size of the seal should be in proportion to the base upon which it is written and the rows of the characters tend to be regular. The marks of the Yongzheng period often have a greater elegance than those of the Qianlong period, which can appear stilted. One common feature of the nineteenth century copies of the earlier Qing reigns, is that the characters are composed of ‘hollow lines’ filled with watery interiors, which are easily seen with a magnifying glass. These ‘hollow lines’ result from inferior mixing of the cobalt blue. It is also believed that the cobalt available in the 19th century was not of such good quality.