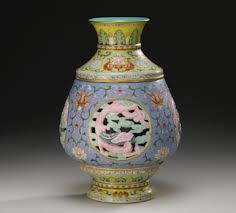 The pear-shaped revolving body painted with formal lotus scrolls reserved on a pale-blue sgraffito ground, further reticulated with four evenly spaced gilt-rimmed medallions, each containing a puce-enameled dragon writhing amidst scrolling green clouds, all below a yellow-ground waisted neck painted with alternating bats and lotus flowers below a raised ring and a band of upright lappets beneath the key-fret bordered mouthrim, the angular shoulder further encircled by a blue and orange wan-symbols border, all supported on a similarly decorated waisted foot, the inner cylindrical body painted with the wufu flying amidst tall bamboo and flowering camellia wreathed in clouds, seal mark in underglaze blue. Height 8 1/4 in., 21 cm

Technical innovation and finesse in porcelain production were both expected and encouraged during the Qianlong emperor’s reign. Therefore it is not surprising that revolving vases appear to have been introduced during this time, under the supervision of Tang Ying, the ingenious supervisor of the imperial factory, who raised the standard of Jingdezhen porcelain to its highest level. Revolving vases such as the present lot are amongst the most complicated porcelain produced in Jingdezhen and would have been the perfect demonstration of the technical virtuosity of the craftsmen at Jingdezhen.

Revolving vases can be found in several important collections, including one with a very similar design but of a slightly different form in the Palace Museum collection, illustrated in The Complete Works of Chinese Ceramics, Shanghai, 2000, pl. 23. See also a blue-ground revolving vase from the National Palace Museum featuring pink dragons and illustrated in Stunning Decorative Porcelain from the Ch’ien-lung Reign, Taipei, 2008, no. 77.