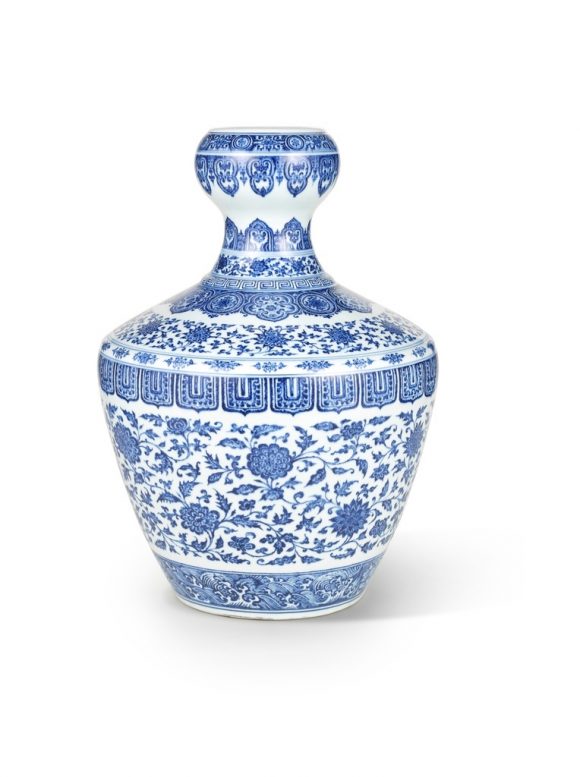 Bonhams’ auction of Fine Chinese Ceramics and Works of Art achieved spectacular results with more than 90 percent sold by value on November 27 in Hong Kong.

The sale was led by the extraordinarily rare blue and white garlic-mouth vase from the Yongzheng Period of the Qing Dynasty, which sold for HK$76,280,000 (US$9.8 million), more than 12 times the pre-sale estimates (HK$6,000,000-8,000,000). As soon as the vase went on the block, frenzied bidding in the saleroom and on the telephone led to a rapid escalation in the bid price in a matter of seconds. The most expensive piece of Chinese ceramics sold at auction at Bonhams Hong Kong eventually went to a private collector from mainland China.

Dessa Goddard, Vice President and Director of Asian Art at Bonhams, who sourced the vase in the US EastCoast, noted: “It was a triumph for the global Chinese art department that this magnificent vase was sourced by Bonhams US, sold in Hong Kong and bought by one of our regular global collectors.”

Asaph Hyman, Director Chinese Art, said: “We are delighted with the highly successful results, demonstrating the continuing strength of the Chinese art market for the finest and rarest objects.”

Commenting on the sale, Colin Sheaf, Chairman of Bonhams Asia said: “This auction was a fittingend to an impressive year of consistent high prices and fine objects offered at our prestige Hong Kong permanent year-round auction gallery. We look forward to an equally productive and expansive series of top quality auctions in Hong Kong in 2015.”

The next Fine Chinese Ceramics and Works of Art auction will take place at Bonhams Hong Kong in May 2015.