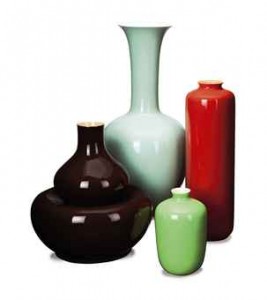 The monochrome porcelains and biscuit-fired wares of the Qing period are relatively uniform throughout, and can therefore be treated together – not separately by reign, as opposed to the polychrome porcelains, where each reign has its inherent character. The key to the beauty of these pieces, much appreciated in both China and Europe at that time, lies in their technical accomplishment, in the brilliance and finesse of the colours, and the quality and texture of the glaze. All the glazes and enamels are vitrified coverings based on various elements (copper, iron, lead, manganese oxide, etc.), and are best classified according to the firing temperature. 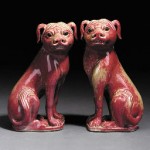 Sang de Boeuf (Ox-blood) glaze is characteristic of the Kangxi period. It is known in China as lang-yao, the exact meaning of which is not certain. (It has been suggested that it derives from the name of a potter Lang who is said to have brought this glaze to perfection.) It is a deep rich red, based on copper oxide; the most usual form of applying it was to dust it onto the piece downwards, producing a kind of striped effect. It sometimes has a fine crackle and minute little holes or bubbles. On the Imperial pieces the application of the glaze was skilfully controlled, for it has a tendency to run: it stops just short of the base of the vase. On late pieces, the glaze may have run over the foot and fixed the pieces to its support during the firing; the use of the emery wheel to separate them then leaves a trace. The glaze sometimes thins out on the upper rim or neck of a vase or on the base; then it takes on a greenish hue because of the iron present in the body. This kiln “accident” was deliberately produced in delicately coloured pieces, called “green lang-yao” 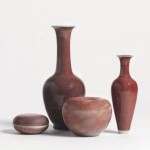 Pieces with “peach bloom” glaze are accounted among the most exquisite specimens of the late Kangxi period. Copper oxide produces this colour, either uniform or flecked, which is described by historians in the following manner: “A pale red, becoming pink in some parts, in others mottled with russet spots, displayed upon a background of light green celadon tint. The last colour occasionally comes out more prominently and deepens into clouds of bright apple green tint.” There are eight shapes made for the scholar’s table in “peach bloom” porcelain:

1. “Guyanyin” vase or amphora, so called because of a certain similarity with the vase for lustral water carried by the goddess.

6. “Three string vase”, so called because of the three rings decorating the base of the neck.

7. “Coiled dragon vase”, a bottle vase with a little dragon entwined round the base of the neck. 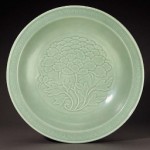 With an iron-oxide base, the celadon glaze is one of the most brilliantly successful of all Qing ceramics. It is evidently inspired by the pottery of the Song period: the subtle pale blue-green of the Ru or the kinuta of Longquan. Applied on a white porcelain, they seem more brilliant, more uniform and less opaque than their models. The demand for these pieces was immense in the reign of Yongzheng, to judge by the multitude and diversity of pieces described by the famous Tang Ying. An occasional slightly raised design under the glaze, always very precise. The shapes are very varied and show the same quality of invention. Apart from writing accessories, they include many vases of the archaic shape. A reign mark often appears on the base.

Crackled wares, imitated from the Song Imperial wares, belong with the celadons because of their colours. The glaze of rather opaque cream tending to grey or green is not as subtle as that of the uniform celadons. These pieces are, however, evidence of extraordinary virtuosity. The crackle varies in sizes, forming “crab’s claw” or “fish eggs”. Still, in imitation of the Song, the ge glaze has its place among the most beautiful creations of Chinese ceramics of the Qianlong period. This production would appear to have been instigated by the emperor who was a great admirer of the Song pieces. He did not hesitate to also add his own calligraphy on the pieces, describing his appreciation of them.

The glossy, almost greasy glaze is well integrated with the body. The oldest pieces are generally rosy cream under Kangxi and bluish white under Qianlong. Marks are very rare or almost lost in the thickness of the glaze. Some late pieces, fired at a lower temperature, have a less hard body: this type of ware is not as vitrified as porcelain. The potters of Dehua made many of the usual objects, libation cups and bowls, vases of different shapes, cylindrical brush jars, wine jars and teapots, cups, dishes, writing accessories. It should not be forgotten that in China it was correct, in the Mandarin class, to choose the colour of objects according to season or the occasion. The subjects most often represented are the divinities of the Buddhist or Taoist pantheon, the dogs of Fo, chimaeras, etc. then came European subjects, statuettes of Adam and Eve, groups of Dutchmen hunting and so on. Such is the detail of the faces and clothing, that these figurines do not look as if they had been moulded at all.

The range of browns on an iron-oxide base is very large, running from golden brown, dead-leaf or cafe-au-lait to “Nanking yellow”. Though warm and lustrous, these colours are rarely used by themselves but alternate with blue-and-white designs or polychromes. These brownish glazes are also near to the “tea-dust” tones or chayemo reserved for Imperial pieces, and to the rust-red jiexiu, but the effect is less uniform. The surface is covered with little flecks, lighter or darker, with a soufflé effect, probably obtained by blowing the colour through gauze.

Black is applied over a porcelain glaze and on biscuit-fired pieces. Its sheen reached such a peak of perfection under Kangxi that it was termed “Mirror Black”. It is obtained by mixing iron oxide and manganese rich in cobalt. Many coats were needed to obtain the density giving this incomparable effect of depth. It was sometimes adorned with gold motifs or appliques in a muffle kiln, though they have generally disappeared. In the Qing period, this decorating was applied with gold powder whereas in the Ming Period gold leaf was used. In the Qianlong period, the black has a brown sheen, particularly visible round the mouths of vases, loses its brilliance, and turns mat. Shapes are classical: rouleau vases, stem-cups, big-bellied jars with lids, bitong brush holders.

Derived from cobalt, blue glazes are infinitely varied: from deep blue (called “Mazarine blue”) to the palest clair de lune, every intermediate tone is represented. A speciality of the reign of Kangxi is the soufflé or “powder blue” which is rarely found alone but, like Mirror Black, is used with a gilded decoration. Powder blue often serves as a ground for pieces decorated in famille verte enamels.

Most appreciated, especially in Europe, is the apple green of Kangxi, obtained by applying an emerald green enamel glazes to a greyish glaze already fired, and giving it a second firing at a lower temperature. Under Yongzheng and Qianlong appears a “camellia leaf” and cucumber green, both attributed to Cang Yingxuan and continued by Tang Ying. In late pieces, green is often associated with black.

Turquoise blue glaze is derived from copper. It appeared, as we have seen, in the 14th century. At the end of the 17th century, it reached the peak of its perfection with the efforts of Cang Yingxuan. It achieved great popularity in both China and in Europe, with many pieces being exported there. This type of colour is usually applied on the biscuit, and is rather dark and intense under Kangxi, lighter under Yongzheng, and often has a net of crackle and darker streaks of greenish blue towards the end of the reign of Qianlong.

Aubergine (formerly called “violet” in French 17th century inventories) has a base of manganese oxide. It was associated with turquoise from the Ming period onwards (on stoneware, biscuit and porcelain). The word aubergine has no equivalent in China, and this basic colour is probably mentioned in the famous list of 1729 as “brown purple”. Pieces marked on the base, either in underglaze blue or impressed on aubergine enamel, generally have the Yongzheng or Qianlong mark. The range of turquoise and aubergine objects is extremely wide: lotus leaf cups, vases of different kinds, Fo dogs, Buddhist and Taoist figures, often with the flesh left in biscuit colour, animals and poultry, parrots – favourite bird of the goddess Guanyin – and so on.

Yellow is the Chinese Imperial colour. Yellow glazes in various nuances appeared in the late Ming period and continued until the 19th century. Imperial yellow, especially brilliant, is based on iron. Cups and bowls of plain “Imperial yellow” were still being found in China in 1935 in their original wrappings. Indeed, without marks it is quite difficult to decide on the date of manufacture of all the vases, cups and bowls enamelled in Imperial yellow. Colour is no certain guide. In principle, the light Imperial yellow should be the of the Yongzheng period. On the other hand it is relatively easy to date pieces of “eel yellow”, “flaked yellow” attributed to Cang, “carnation yellow”, “mustard yellow” (rather crackled) and a certain “European-style yellow”, so described in the list of colours employed under Yongzheng. These pieces nearly always have a dynastic mark on the base.

Colours fired at low temperature belong with the famille rose enamel glazes: iron red, from coral to orange, pinks derived from gold, from the brightest cherry to the palest pink; a turquoise green and pale yellow. These colours, called “foreign colours”, are not generally used alone. There is one exception, however: the iron red with a coral or tomato tint that covered a large number of bowls, plates, and figurines. These pieces are rarely of the Kangxi period, but usually of Qianlong. Green and especially pink are often used to decorate the backs of small pieces; cups, saucers, plates, etc. A delicate blowing process allows colours to be superimposed, producing a spotted effect which has evoked the description “robin’s egg”.