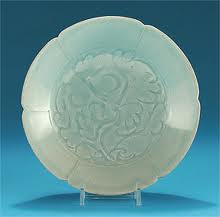 Qingbai (or Yingqing) is a type of white porcelain known for its greenish/bluish tint and fine quality. Although it was produced during the Song Dynasty, it is not part of the five classic wares (wu wei-ci) of the Song period. Qingbai began appearing in the Northern Song period around 960-1127 and quickly became popular on the Chinese market. Their popularity can be attributed to the fact that although they were produced in Jingdezhen, they were not restricted to only Imperial use. The peak of Qingbai popularity was between 1127-1279, when they were widely exported to China’s neighbouring countries, and duplicated across China’s various kilns.

It is easy to see why Qingbai wares were so popular. Of all the celadon of the Song Dynasty, Jingdezhen’s Qingbai porcelain was the most outstanding. With a thin and refined body, its decorative patterns sometimes cast projections when light strikes through them. The glaze was clear and sparkling, making Qingbai rank above other porcelain in terms of purity and refinement. The colour ranges from bluish green, pale blue and almost white. The pieces from Fujian look more chalky, tending towards grey. This bluish tint has been attributed to the presence of lithium in the glaze, but it appears more likely that it is due to iron phosphates given reduction firing at a high temperature. The rims of cups are often like those of Ding (Ting), bare and circled with metal, while the base is glazed.

The decorative motifs on Qingbai were exquisite, as carved, painted, and embossed sculpture images were expertly applied. Common incised motifs include peonies or highly stylized birds, on a very characteristic ground of small hatched lines, or wave scrolls. Some pieces were fluted on the body or the base; others, like the Ding or Northern celadon, have small leaves applied round the neck. From the 12th century, moulded decorations were the most current, depicting either children among peonies or phoenixes among flowers. Sometimes dragons in relief curl round the belly or on the handles of cups and vases. Some funerary vases, generally made in pairs and intended for holding offerings to the dead, were decorated with figures in relief. This late Song type was also to be found under the Yuan. At this period the “bluish-white” porcelains of south China were exported to South-East Asia, the Philippines and the Near East, although these pieces intended for export were often of mediocre quality.

Qingbai has become a prestigious name and representative of Song Dynasty porcelain wares. In fact, Qingbai porcelain served as the basis from which blue and white porcelain was developed at Jingdezhen. Under its influence, many kilns around Fujian, Huangzhou, Sichuan, Zhejiang, Anhui, Hubei, Yunnan, Guangxi, and other provinces began to imitate and produce Qingbai, eventually establishing a family of Qingbai kilns in China. Since Qingbai porcelain was an attempt to recreate the splendour of green-white jade ware, its glaze colour fell between green and white. Its name and general term representing a whole family of porcelains where white was found within green and vice versa.