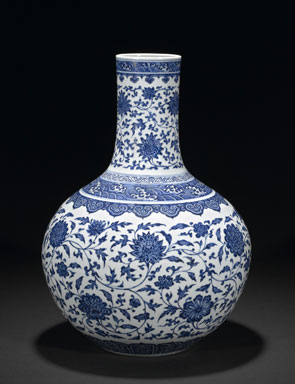 SAN FRANCISCO, CA.- A fine and rare blue and white porcelain vase, Yongzheng mark and period (1723-1735), will be a star attraction at the Bonhams auction of Fine Asian Works of Art to be held December 10 in San Francisco. This superb vase, of tianshouping form, is part of a small group of Qing dynasty porcelains from the collection of former First Lady Lou Henry Hoover (1874-1944) to be sold on behalf of a California Institution (est. $500,000-700,000). Mrs. Hoover started collecting Chinese porcelain while living in London in the early 1900s after returning from two years in China where her husband Herbert, a trained geologist, served as Director General for the Office of Chinese Mines for the Chinese government. The Hoover porcelains will be a choice group among the Ming and Qing blue and white, monochromes and enameled wares to be offered in this auction of Chinese, Korean, Indian and Southeast Asian works of art from American institutions and private collections.

The 400-lot auction commences with more than 40 lots of fine Chinese textiles from private and institutional collections. A fine blue ground kesi woven dragon robe, 19th century, formerly in the collection of Col John and Mary Young, is one of the many examples of its type to be offered (est. $8,000-12,000) from the Tacoma Museum of Art, sold to benefit future acquisitions. A rare silk embroidered ‘12 symbol’ empress’ informal robe, mid-late 19th century (est. $40,000-60,000) from a private East Coast collection should attract the interest of many sophisticated textile buyers. A fine selection of rank badges from the Kangxi period through the 19th century will also go on the block, along with a few choice, 19th century embroidered figural panels.

An imperial opaque pink glass bottle, Qianlong seal mark and period (est. $100,000-150,000) is one of 15 lots of superb Chinese glass to be offered from the Ina and Sandford Gadient collection. Overlaid in transparent red glass, depicting a lush garden scene with a gazebo among exotic plants and animals, it carries a Charlotte Horstmann provenance, purchased in the 1970s by the present owner. This group shares the stage with glass from the Alan Feen and Lillyman collection, offering collectors a brilliant panoply of colors, shapes and designs all executed by top craftsman of the Qing dynasty.

A fine and massive 18th century huanghuali veneered altar table from a Pacific Northwest collector (est. $50,000-70,000) is one of the star lots among the choice group of Chinese furniture to be sold. Two pairs of huanghuali continuous humpback arm chairs, 18th century, from the Crosthwaite family will also go on the block, along with a choice pair of small zitan cabinets, which are among Property from the Estate of Eleanor Majors Carlisle, San Francisco.

A Late Shang/Early Western Zhou dynasty cast bronze xian (steamer) and a Shang cast bronze ding from a private Ohio collection will be among the early Chinese works of art and bronzes to be sold. A superbly rendered Tang sancai glazed horse, of impressive size (29 ¼ inches (74.3 cm) high), from a private Florida collection (est. $50,000-70,000) highlights this group.

A large portrait of a Buddhist Priest, Ming dynasty from the Sarkisian collection, Denver (est. $20,000-30,000) will be among the more than 50 lots of classical and modern Chinese paintings to be sold in this sale. Works by Qi Baishi, Fu Baoshi, Pu Ru, Wu Changshuo, Li Keran, Lu Yanshao, Guan Shanyue, Ding Yanyong, Chen Yifei and other famous 19th and 20th century artists will complete the Chinese section of the sale.

Bonhams is proud to offer Two Figures, painted in 1964 by important 20th century Korean artist Park Soo-Keun, from the Shirley Fockler Living Trust (est. $200,000-300,000). This painting, rendered in oil on board and with the original frame, shares the same history and date as another by Park Soo-Keun, On the Road Home, owned by the descendents of Mr. and Mrs. Herbert Rea of Portola Valley and sold by Bonhams on December 3 of 2010. The owner of Two Figures was a member of Mr. Rea’s business staff. Mr. Rea was, in addition to his company, Western Business Publications, Vice President – Publications of the Pacific Area Travel Association (PATA). Mr. and Mrs. Rea, together with the owner of this current lot, traveled to Korea in 1967 for a PATA conference. It was at that time that both paintings were purchased.

Oil paintings by Fernando Amorsolo Y Cueto (1892-1972) and Lee Man Fong (1913-1988) will be featured among the Southeast Asian paintings and works of art to be offered. The sale will conclude with 15 lots of Indian and Southeast Asian sculptures from the collection of Doris Weiner, including a monumental andesite seated figure of Ganesha, Java, Classical period 9-10th century (est. 40,000-60,000).

The sale’s illustrated catalogue will be available online in the preceding weeks, for review and purchase at www.bonhams.com.