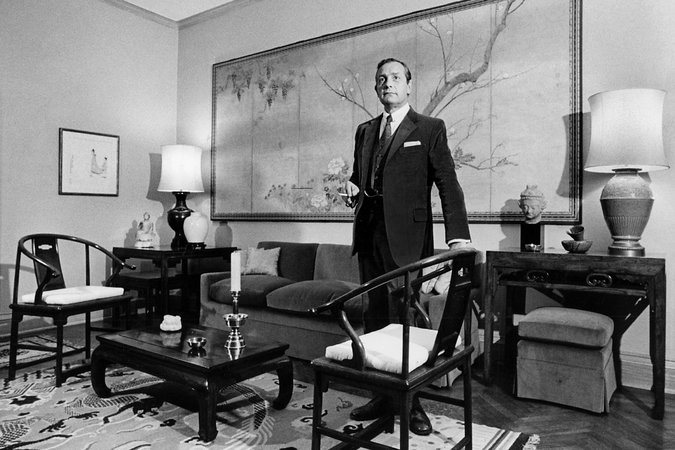 Ellsworth, who was once called “the king of Ming” by the New York Times, was the first dealer to seriously collect and publish on what is commonly referred to as Ming dynasty hardwood furniture. As such, he is known for having created new areas of appreciation in collecting Chinese art such as Ming and Qing dynasty furniture and ancient Jade.

Born in Manhattan on July 13, 1929, to an opera singer and a dentist, Ellsworth first began collecting as a boy. As a teenager, he met and worked under Alice Boney, the grande dame of the Asian art trade in New York City who taught him what she knew about painting, porcelain, and furniture and introduced him to Wall Street financiers.

He began collecting Chinese paintings in the mid-1960s. These were works from the 19th and early–20th century, for the most part in traditional mediums like ink on paper or silk, that art historians had largely ignored.

“He was known in the Asian art world for having a great eye and for being a connoisseur of Asian art at a time when collectors were few,” director of the Asia Society Museum Melissa Chiu told artnet News.

In 1959, Ellsworth opened a shop on 58th Street on the Upper East Side and in 1970, moved his trade to a town house. In 1977, he moved to his last address at 960 Fifth Avenue. In 1979, after diplomatic ties were forged between China and the US, Ellsworth was the first US art dealer to travel to China. There, he took trips to the government warehouses filled with art that had been confiscated during the Cultural Revolution. He picked through the 19th and 20th-century pieces and scooped up what he liked.

“You had to sift through [tons] to find the right stuff,” Ellsworth told the South China Morning Post in 2001. “I never looked at the seals. I looked at the calligraphy, the brush strokes.”

In 1986, Ellsworth bestowed some 480 paintings to the Metropolitan Museum of Art, which are reproduced in the second volume of the dealer’s three-volume text, Later Chinese Painting and Calligraphy: 1800-1950, published in 1987 by Random House. That collection was instrumental as a catalyst for the creation of the Astor Chinese Garden Court at the Met. The collection encompasses just about all of the traditional masters who worked during the period, including Wu Changshi and Wang Zhen, as well as Xu Beihong. It also had a sizable number of works by Qi Baishi, one of the most well known of Chinese painters.

Ellsworth was known for having a trader’s instinct, and for an ability to charm the very wealthy. He would pick up whole collections and then sell them off in dribs and drabs to collectors and museums. In the early ’60s, he bought an important Swiss collection of southeast Asian sculpture, many of which were subsequently acquired by John D. Rockefeller III, and are now the pride of the Asia Society collection to which they were given in 1978. Hong Kong trading magnate Sir Joseph Hotung was another client. Ellsworth helped nurture Hotung’s collection of antique Jades. Hotung financed the early ’90s renovation of the gallery of Chinese antiquities at the British Museum.

“For the past forty years Bob was considered the “go-to” dealer for serious collectors of Asian art,” said Chiu. “He placed works in many major private and public collections, including the Asia Society, via John D. Rockefeller III’s personal collection, Cleveland Museum, and the Metropolitan Museum—anything from Chinese gilt Liao Dynasty helmets to sensuous Indian Chola bronzes.”

Maxwell K. Hearn, head of the Asian art department at the Met and a friend of Ellsworth, told artnet News, “By creating collections [and not only collecting individual pieces], he was able to demonstrate the importance of new fields.”

Ninety paintings from Ellsworth’s donation to the Met were exhibited in a 2001 show that chronicled works of the traditional masters working at the time, China’s entry into the modern world.

Among the many colorful notes in his personal history, in 1993 Ellsworth was made an honorary citizen of China, a gesture he once said he owed to the assistance he drummed up for the restoration of historic temples and houses in Huizhou, a historical region in southeastern China. He was known for running in high society circles and had an enduring friendship with the actress Claudette Colbert. His well-appointed 20-room apartment on Fifth Avenue, which he referred to as the “honey trap,” was an artful commingling of Eastern and Western culture replete with Turkish carpets, leather armchairs, silver candlesticks, and Chinese ink paintings. It was there that he had inherited British socialite Claus von Bulow’s dog when Bulow was arrested for the attempted murder of his wife and had to leave the building. Hearn knew Ellsworth when he was living in that apartment and noted that one of the things Ellsworth was most proud of was his great sense of style. “He remarked once,” said Hearn, “I may not be as wealthy as many of the people who buy from me, but I daresay I live better.”

Ellsworth attributed his success as a dealer to his having kept one of every three things he bought and once said that when he died, what was left of his holdings would be auctioned off in a “consecutive seven-day sale.” “The last lot will be a single item, the finest piece of jade in the world – which I wear on my finger.”