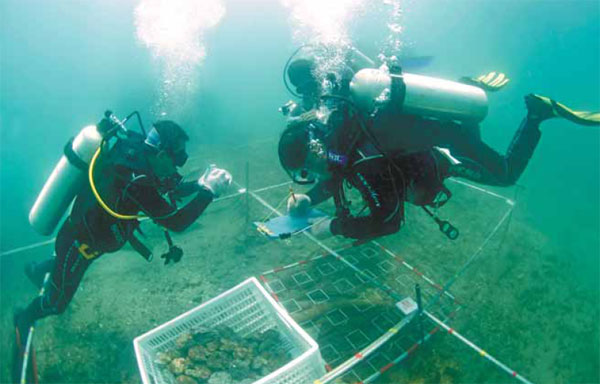 After a descent of 16 meters into waters off the coast of Fujian province, Zhao Jiabin touched the sandy seabed.

The turbid water meant the maritime archaeologist’s vision was restricted to just 1 meter. Apart from a group of curious shrimps attracted by the beam of his flashlight, Zhao saw nothing until a blurred reflection on the seabed caught his eye.

“My instincts told me it wasn’t the reflection of shells. This was porcelain – art treasures that had remained untouched for hundreds of years,” said Zhao, a veteran with nearly 20 years’ experience in the field.

In the eerie, grayish seawater Zhao had discovered a wooden merchant ship, believed to date from the Qing Dynasty (1644-1911).

Laden with fine porcelain, the vessel was part of the flourishing trade that helped spread Chinese culture and influence from East Asia to Southeast Asia and even to Europe.

“To be out on the ocean and come up with a 400-year-old ship makes you shiver,” Zhao said. “I was so excited that my jaw dropped, and I almost lost my regulator.”

However, when the unexpected sight came slowly into focus, Zhao saw that the 17th-century vessel had been ripped open by illegal treasure hunters.

Thousands of pieces of porcelain, all piled on top of each other in a huge jumble were spread over the 23-meter-long wreck, half buried in sand and fallen rocks.

About 300 years ago, the porcelain ware – bowls, plates and jars decorated with delicate blue and white patterns – were en route to Europe, before the ship sank and became a hidden museum.

But now the porcelain had been looted, Zhao said. In a bid to grab as many pieces as possible, the looters had torn off the deck and dragged the art treasures out, causing many of the priceless relics to be broken in the process.

“The debris will soon be washed away by the current and nothing will be left. I feel so sorry that we didn’t protect the ship before it was looted,” said Zhao, director of the underwater-archaeology department at the National Museum of China in Beijing. “Having been overlooked and lacking many resources, the development of China’s maritime archaeology has experienced many twists and turns.”