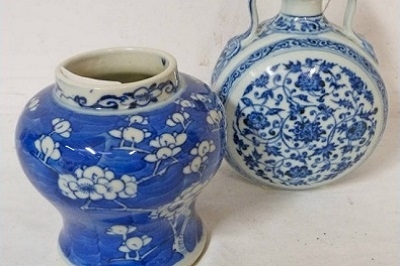 Onlookers at Taylor’s Auction Rooms in Montrose were shocked on Saturday as bidding for an unremarkable vase and bowl from its regular sale, which were valued at between £20 and £30, went through the roof.

The buyer and seller have requested anonymity while the final sale is completed.

Auctioneers said the buyer was from overseas and “pleased with their purchase”.

The vase and pot were provided to the auction house by a client in the north of Scotland who is said to be “very happy with the outcome of their sale”.

The lot was sold with a “Chinese blue and white pot with four character mark” but it is believed the two-handled vase was the high ticket item.

Jonathan Taylor, the salesroom manager for the auctioneer said: “The lot has sold well above our first estimate and for more than we initially thought it was worth.

“Unfortunately, we can’t say much more at this time while we are still waiting for the sale to be finalised.

“What I can say is that all parties are very pleased with the outcome and it this beats our previous salesroom record.”

The previous record at Taylor’s Auction Rooms in Montrose was set in 2010 for the sale of a photograph album at £54,000.

Properly authenticated Chinese porcelain can be of huge value and some sales of it are dependent on independent valuation.

High value Chinese porcelain can be authenticated by ‘reign marks’ which give an indication of when a piece was fired.

Four or six character marks became popular during the Ming dynasty period between 1368 and 1644 and Qing dynasty between 1644 and 1911.

According to Chineseart.co.uk One dealer confessed that he went to his bank and “drew everything out”.  He went to the sale with £60,000 in his pocket but didn’t even get a bid in . . .

Final Note! The dealer mentioned above wants to thank his lucky stars he did not spend his 60k…