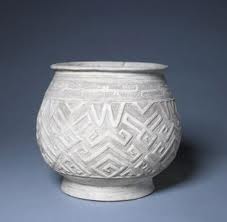 The Shang-Yin Period (1600 – 1111 BC) refers to the reign of the Shang clan in China. The Shang Dynasty ruled for over six hundred years before their eventual decline. The rulers’ virtue and effectiveness gradually weakened and the court increasingly indulged in luxury and indolence, turning from sovereigns into tyrants. In 1111 the King Zhou-Xin was overthrown by the Duke of Zhou, who had organized the insurrection, seized power, and crowned himself King Wu of Zhou.

The kilns of the Shang potters were better built than those of the Neolithic period. At Zhengzhou, kilns have been discovered that date from the beginning of the Shang period. They were still small in size, with a hearth supported by a pillar. But by the end of the Shang period, kilns were no longer built on pillars, the chamber was larger and the hearth thicker. A central round hole and four oval leaf-shaped holes provided better distribution of the heat, which could now reach 1200 °C.

There was no break between the Longshan culture and that of the Shang; the latter maintained the traditions of their predecessors. In the early dynastic period, the potters made objects in red or black earthenware, but while grey pottery seems to have been current in all the territory controlled by the Shang, red and black gradually fades from the record. The fabric of the vessels intended for daily use is thick and gritty.

Surfaces are usually very rough to the touch and traces of beating are visible; cord impressions are frequent and often deeper than in the Neolithic period. Many of these grey wares are made in basket moulds or coiled, then finished on the wheel.

Use of the wheel becomes more frequent in the late period, after 1400 BC. Even then it seems to have been employed mostly for funerary pieces. Towards the end of the Shang period, grey pottery shows a tendency to imitate the sharp forms of bronzes. It is often polished on the wheel and decorated with incised or impressed designs.

White pottery of the Shang period is as rare in museums as in private collections. It is fine and very white when fired in a reducing atmosphere, slightly yellow or pink if there has been oxidization. The body contains a large proportion of kaolin, the white clay used in the manufacture of porcelain. However, in the Shang period, the potters were not acquainted with with the method of mixing this refractory clay with fusible materials, so that these white wares, fired at a temperature of 1000 °C, are porous, opaque and very fragile. The vases, carefully polished on the wheel before decoration, imitate the bronzes from the same period. They are decorated with spirals, meanders, zigzags, dragons, and the fantastic animal mask, the taotie. This pottery was to all appearances luxury funerary ware exclusively, for the only specimens that have been found come from the royal tombs of the region of Anyang.

The improved kiln operation and distribution of heat enabled the Shang potters to manufacture stoneware, Yingtao, which is harder and less porous than earthenware. At a certain temperature (over 1000 °C), the silica present in the clay vitrifies; the body of these stonewares thus contains sand and kaolin in an impure state. The body was beaten to obtain strong cohesion of the vessel walls and prevent them collapsing from the heat. Nonetheless, the texture is rather course; examined under the microscope it shows granulation and cavities.
The Chinese consider that the Shang potters discovered the secret of porcelain or ci in Chinese, since they made these kaolinic stonewares that are non-porous, hard, and resonant when struck. In the West, these stonewares are not considered porcelain – a term reserved for a very refined pottery with kaolin and felspathic base, which, after firing, must not only be hard and sonorous but also translucent. Be that as it may, the body of the Shang ware is very close to that of the Ming porcelain.

Hard pottery has been found at Anyang, dating from the end of the Shang period, with a coating of glaze about 10 mm thick. Observing that when the body gathered any ash during the firing, a shiny film formed over that particular spot, the Shang potters tried to reproduce this accidental phenomenon at will by glazing the surface with plant ash and earth containing lime. The potassium in the ash acts as a flux; it facilitates the fusion and vitrification of the coating which is called a glaze.

The Shang period was a deeply formative one in Chinese culture: it saw the beginning in China of the metal age, of urbanization and of the use of the written language. The glory of Shang art, is of course its bronzes, but the pottery of this time is also greatly interesting from an aesthetic point of view.

Some Chinese ritual vessels were given their names at a very early period, but many of them have been identified in much more recent times, especially in the Song period, when archaeologists made great efforts to identify Shang bronze vessels described in the Chinese classics. Some typical types of vessel are described as follows:

Li: a cauldron standing on three hollow legs. The Neolithic li is stately in shape and has its legs placed wide apart. Under the Shang, at Zhengzhou it has already become more stocky; the body and marks of cording are course, and the mouth ends in a rim. At the end of the Shang period, the legs have become so short and stumpy as to have almost disappeared.

Jia: a wine warmer. It has either hollow legs, or solid legs and a handle on one side. The jia is derived from a Neolithic prototype first appearing in the Longshan period, and seems to have been one of the first pieces to be reproduced in bronze.

Xian: a cooking vessel in two parts. The lower section is a cauldron on three hollow legs like the li; the upper section is pierced as a steamer. In the Anyang period – after 1388 – lugs appear on the xian.

Ding: a cooking vessel. Standing on three solid legs, it thus differs from the hollow-legged li.

Gui: a vessel for holding grain. It stands on a low, slightly flaring foot-ring and sometimes has handles. It is known, too, as yu, a name also given on occasion to tripod ewers.

Dou: a bowl for food offerings, with a hollow flaring foot, of various heights, sometimes perforated. The dou, which often has a lid appeared in the Longshan period also.

Pen: a flat dish or bowl.

Hu: a water pot with or without a lid.

Lei: a wine jar of a more rounded shape than the hu.

Jue: a wine goblet standing on three legs with a pouring lip.

Gu: a goblet with a cup shaped rim.