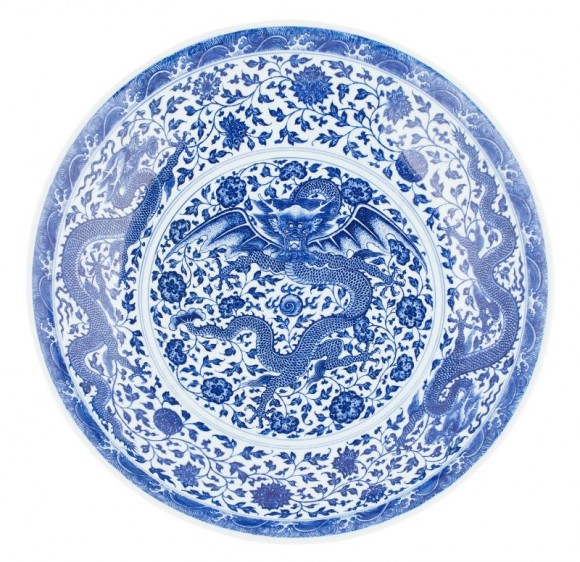 Lyon & Turnbulls Description of lot no 368

LARGE BLUE AND WHITE MING STYLE ‘DRAGON’ CHARGER
LATE 19TH / 20TH CENTURY the centre decorated with a coiling five-toed dragon encircling a flaming pearl and enclosed by a band with two further running dragons, all against a scrolling foliate field with lotus and chrysanthemum and a wave border, Qianlong seal mark to the underside but later
51cm diam Estimate £3,000-5,000

(Irv) I viewed this dish today and in my opinion it is Qianlong mark & period, look closely at the dish, do you notice the wings on the dragon? Do you know why this dragon has wings? No!

Its winged so it can fly way above the estimate to dizzying heights. Will update with price tomorrow……….. In the meantime read on….

The dragon traditionally symbolises the ultimate auspiciousness and authority in Chinese history, whereby it represents the total control over all the natural elements and as the bringer of luck as well as prosperity to those who are worthy. The Emperor being the Son of Heaven, is always represented by a dragon to symbolise his Imperial political power and strength over his nation and subjects. As shown by the current lot, the main forward facing dragon is clearly defined by the bold styles adopted by the Qianlong Emperor, where the mythical being is depicted with the utmost ferocity and overwhelming presence.

Under the rule of the Qianlong Emperor, Chinese art and the ceramic industry reached new heights, creating some of the most spectacular porcelains ever crafted in the history of China. The blue and white porcelain in particular during the Qianlong period achieved new heights in terms of decorative techniques, shapes of the vessels as well as the quality of the materials used. In the expert hands of the Qianlong Imperial kilns at Jingdezhen, firing of the cobalt blue pigments surpassed the simple deep and luminous blue colour, instead achieving a luxurious range of layered tones carefully controlled to represent realistic subjects, in this case, bringing the naturalistic dragon to life.

The porcelain from the early years of the Qianlong reign as exemplified by the current lot is often difficult to separate from that of the Yongzheng era. This is not surprising as a selected compilation of designs had been gathered to guide the production of Imperial ceramics in 1729, led by Tang Ying, whom later became the director of the kilns at Jingdezhen. Hence many of the Yongzheng period designs worked by experienced artisans under Tang Ying’s leadership would have served the Qianlong emperor during his succession to the throne in 1736.