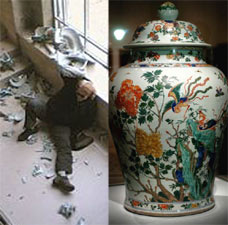 A 17th century Chinese porcelain vase accidentally smashed when a museum visitor tripped on a shoelace is back on display after being restored.

The vase, from the Qing Dynasty, was broken in January when disabled Nick Flynn, who is in his early 40s and lives near Cambridge, crashed into it at the Fitzwilliam Museum in Cambridge.

Specialist ceramic restorer Penny Bendall today said she had glued together 113 pieces ready for the vase to feature in an exhibition at the museum about art restoration.

“Putting the vase back together may have looked impossible to most people but actually it wasn’t a difficult job – fairly straightforward,” said Ms Bendall.

“The museum collected the pieces. None had warped so they fitted back together. The most difficult aspect was the sheer size of the vase – it weighs 45kg. It was hard to move it around.

“It took me about three months. I don’t foresee any major problems with the other two vases. I would hope they will be restored by Christmas.”

Ms Bendall said to the naked eye the vase looked perfect. But she said experts would be able to see the cracks.

“I could cover the cracks,” she added. “But by leaving them it shows that the vase is genuine and gives it authenticity.”

The vase will form part of an exhibition called Mission Impossible? which runs at the museum until September 24.

Museum officials said they considered displaying the 400 fragments of the three vases and not restoring them.

“The difficulty would be ensuring that we kept all the fragments,” said assistant director Ian McClure. “It seemed wiser to restore them.”

He added: “We have many famous pieces of art at the museum. But at the moment these vases are probably the most famous because of what has happened to them. Whenever you mention the Fitzwilliam someone says, ‘oh where the vases were broken’.

“Whether people will still remember in 20 years I don’t know. I hard to say whether what’s happened has added to their value. Probably not.”

Mr Flynn, of Fowlmere, Cambs, was arrested on suspicion of causing criminal damage in April. But in June police said he would not be charged with any offence.