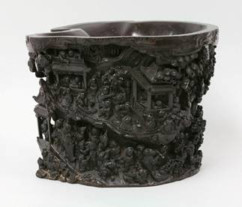 STANSTED auctioneer Sworder’s has unearthed a rare Chinese wooden brush pot, which stood on the floor in a family home for decades, and valued it at between £20,000 and £30,000.

The Zitan artwork, pictured, is intricately carved from a single piece of wood with dozens of figures in a popular Chinese subject known as ‘The Hundred Boys’ around the outside.

It stands just over 24cm (10in) high and is thought to date back to the late 18th or early 19th century.

It has been with its current owners for 38 years and, although they were not aware of its true value, was considered very precious.

Renowned TV antiques expert and Asian art specialist David Battie said: “This brush pot is exceptional and incredibly rare. It’s the only one I’ve ever seen, which makes it a very exciting lot.

“Chinese writers used brushes rather than pens for calligraphy at this point in history and this pot would have been used for their storage.”

“Last year a family brought along a Chinese vase which had been broken and rescued during the Blitz. It sold for £28,000, despite being poorly repaired.