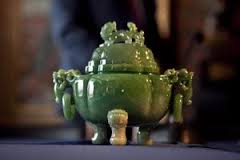 An 18th-century Chinese incense burner was returned to Harvard on Tuesday, 35 years after it disappeared from a university art museum.

Ernest Dane, a businessman and art collector who graduated from Harvard University in 1892, and his wife, Helen Pratt Dane, donated the Qing Dynasty jade censer to the Fogg Museum in 1942.

In 1979, after the museum opened a small exhibition featuring a selection of jades the Danes had donated, museum officials discovered the censer was missing from its display.

They contacted law enforcement authorities, but the censer wasn’t found until 2009, when Sotheby’s auction house in Hong Kong prepared to offer it for sale in its Fine Chinese Ceramics and Works of Art auction. The censer had been hand-delivered to Sotheby’s Hong Kong offices by a private seller, who did not provide any documentation on its history of ownership.

Before the auction, Sotheby’s ran a search in the Art Loss Register database, and the censer was found to be a match with the censer missing from Harvard. The register notified U.S. law enforcement authorities. Based on recommendations from U.S. Homeland Security Investigations and the U.S. attorney’s office in Massachusetts, the Department of Justice in September granted Harvard’s request for return of the censer.

A transfer ceremony was held Tuesday at Harvard.

Thomas Lentz, director of the Harvard Art Museums, said university officials were grateful to U.S. Immigration and Customs Enforcement and the U.S. attorney’s office for working with Harvard to return the censer.

“Because of their efforts, the censer rejoins our permanent collections just before we open the doors to our newly renovated, state-of-the art facility this fall, when it will be accessible once again to students, faculty, and scholars,” Lentz said.

The censer is approximately 6½ inches tall and 7 inches wide. It dates back to the Qing Dynasty, 1644-1911, China’s last imperial dynasty.