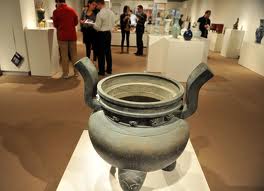 Sotheby’s said in a statement that it saw a total of $46 million for its three sales over the course of the week, while Christie’s reported $44.7 million at five sales spread over four days. The auction rivals had each estimated total sales of about $30 million for the week.

“There was global participation,” Christie’s international head of Asian art Jonathan Stone said in a statement, adding that this reflected “a worldwide demand for the greatest objects of Asian art.”

Before the sales, Stone told Reuters that “the share of Christie’s sales turnover enjoyed by Asian art worldwide has more than doubled in the last five years,” and the results spoke to the sector’s ongoing strength. Indeed, Asian art has on occasion outpaced the once predominant Impressionist and modern categories.

Among highlights, a Ming Dynasty blue and white moonflask, which was used as a doorstop in a Long Island, New York, home and only recently came to attention after its owners spotted a similar piece in a Sotheby’s advertisement, sold for $1.3 million at Sotheby’s, which had estimated it to sell for $600,000 to $900,000.

Also at Sotheby’s, an Imperial jade seal from the late 18th century estimated to fetch up to $1.2 million soared to $3.5 million at the Chinese ceramics and works of art sale. It was the top price of the week at either house.

Henry Howard Sneyd, vice chairman at Sotheby’s for Asian art, said that the $27 million sale, which easily beat its high estimate, was “a good indication of the continuing international demand for the very best Chinese art.”

Before the sales, Sneyd had spoken to Reuters of the strong growth in the Asian art market since 2006, especially in mainland China where a surge of new collectors has been shoring up more established Chinese art clientele from Hong Kong, Taiwan, Europe and the United States.

Christie’s top prices included the $3.2 million paid for an 18th century Joseon dynasty, blue and white porcelain dragon jar, more than half again the estimated price of about $2 million.