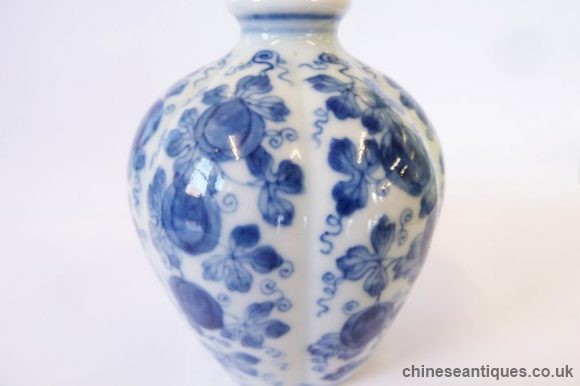 The three-inch tall blue and white vase bearing a Yongzheng six charachter mark has sold for 40,000 pounds at an auction in Melton Mowbray.

The vase carried an estimate of 30 to 40 pounds as it was cracked and chipped & was part of a tray lot.

Senior auctioneer Simon Shouler said: “The vase was on a small tray of Chinese porcelain and much of it was cracked and chipped. 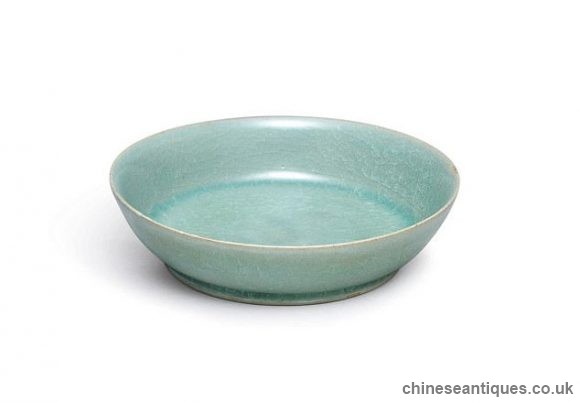 The dish, which has a diameter of just 13cm and would have been used to clean brushes, has a glowing, intense blue-green glaze and ‘ice crackle’ pattern.

It was offered by Sotheby’s with a guide price of £10 million ($13.24 million), but there was a fierce 20-minute bidding war and the dish eventually sold to an anonymous bidder for £28 million ($37.7 million).

The bowl’s buyer has chosen to remain anonymous.

Bidding began at around $10.2m, and the winning offer – from a phone bidder – was greeted with a round of applause. 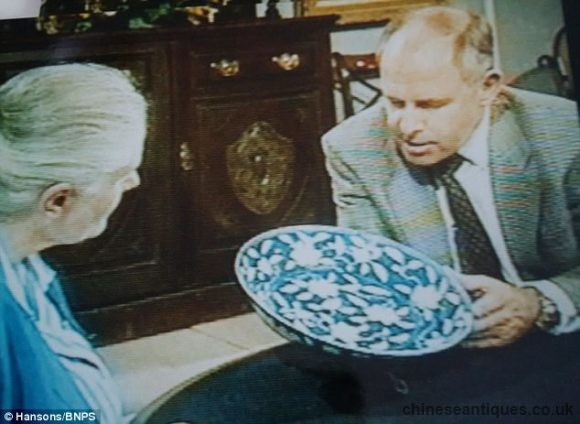 Bought by businessman Alexander Robertson in the early 20th Century, the plate had been valued at £20,000 on the Antiques Roadshow in the 1990s, but remained on display in an ornamental holder for many years.

A replica of the plate is currently on display in the National Museum of China, which is believed to have driven up the price and led to a record 19 phone lines booked by bidders.

Waterproof varnish made by layering numerous coats of the treated sap of a tree indigenous to China and later introduced to Japan. Colors can be combined and layered in relief as well as carved. In Chinese art, lacquer is usually the sap of the qi shu (lacquer tree), rhus verniciflua. The most popular colors are red and black.  The lacquer is applied to a number of different base materials including wood, bamboo, cloth, ceramic and metal.

This is the name given to white-firing China clay used for making porcelain. The name derives from that of the Gaoling hills, from where the China clay used at the Jingdezhen kilns was obtained.

This term is applied to porcelain, mainly decorated in underglaze cobalt blue, which was exported to Europe in the late 16th and early 17th centuries. The name derives from the Dutch, and is a reference to the type of cargo ship, carrack, in which these porcelains were transported from Asia by the Portuguese.

The term ‘jade’ and the Chinese term ‘yu’ have often been used loosely to designate a variety of hardstones. Their use should, however, be limited to jadeite and nephrite. Nephrite belongs to the amphibole group of minerals and is a silicate of calcium and magnesium. Its crystalline structure has the appearance of hair-like fibers felted together to form a closely integrated mass, and it is this which gives it its strength. Nephrite ranks as 6.5 on the Moh scale of hardness. Nephrite has been worked in China since the Neolithic period. Much of the nephrite used in China came from Khotan and Yarkand in Central Asia.

This softwood was used primarily during the Qing Dynasty in the Shanxi region. While hetaomu encompasses a variety of species, it typically has an open-grain texture, with colors tending towards golden brown to reddish brown. These features make this wood well-suited to furniture construction.