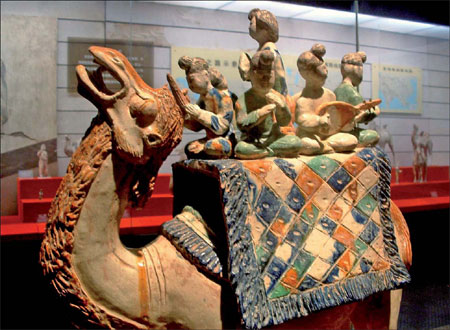 At the beginning of the 20th century, some workers laying out a railway in Mangshan Mountain of Luoyang, Henan province, accidentally unearthed pieces of porcelain. The items were discovered to be Tang Sancai, highly valued ceramics using a decorative mix of three colors dating back to the Tang Dynasty (AD 618-907). Soon after, these works of art were also found on sale at Beijing’s Liulichang antique market sold as cheap replicas.

It was not until later that Wang Guowei, a leading Chinese scholar of history and culture, realized the importance of Sancai as the highest form of Tang ceramic art.

Imitations of the lost art then began to blossom in the country and after more than a century, these items can be easily found in Luoyang’s antique markets or tourist spots, where millions of Sancai craftsmen have become a staple of the city.

Sancai is made of white clay and coated with a layer of glaze, with splashes of bright green and amber on a straw-colored background. It represents the highest form of ceramics from the Tang Dynasty.

Demand for the art form is on the rise among Chinese and foreign collectors alike, ranking high with other porcelain such as the blue-and-white vases from the Ming Dynasty (1368-1644), amid the rising influence and importance of the country that gave the world china.

Of the many Sancai craftsmen, Gao Shuiwang is perhaps one of the few who has mastered the essence of making the ceramics. Two decades ago, due to an abundance of fake items on the market, a Sancai horse sculpture could only be sold at 1 yuan ($0.15, 0.12 euros) or 2 yuan. During that time, new Sancai techniques were put into the spotlight as artisans who did not have a fixed set of standards to follow and could churn out items easily.

But Gao was set on making fine Sancai and he studied the art meticulously. With yellow, green and white as its major tones, Sancai ceramics is usually fired at a temperature of 1,000 C, a complex mix of lead-glazed pottery of varied dark and bright colors interacting as a result of temperature changes. Making high-quality imitations is challenging because color changes are hard to come by.

Lead oxide is considered the principal flux in the glaze, often mixed with quartz in the proportion of three to one. Copper (which turns green), iron (which turns brownish yellow), and less often manganese and cobalt (which turns blue) are used as coloring agents.

“Not everyone can make a fine imitation. The secret of making high-quality Sancai works lies in the portion of the different glaze,” Gao says. The master craftsman often works in his studio for one or two hours without budging, always fixed on minute changes as his creations come to life.

“High-quality replicas of Sancai ceramics are not just about technique. They are about passing on a form of cultural heritage that is embedded in our genes even though the art has been lost for a long time,” says Gao, who, as a member of the Chinese Folk Artisans Society, has received a series of accolades for his work.

Sancai ceramics first appeared in the Northern and Southern Dynasty 1,400 years ago. Its production peaked during the Tang Dynasty, which is why it is known as Tang Sancai.

Sancai also varies widely in shape and subject. Horses, cows, camels, humans and even bedding particles have been unearthed, among which the Sancai Camel with Musicians, which seems to spring to life and tell the stories of Persian merchants along the ancient Silk Road, is one of the best examples and is now on display at the Shaanxi History Museum.

Sancai is deeply embedded in Chinese history and its lifelike images and the beautiful glaze take up every corner of Gao’s studio. His imitation of the Sancai horse and camel vividly take on the flavor of the Tang Dynasty, with a fluent flow of the glaze in perfect combination of settling color.

Admirers say his replicas are so real they nearly got him into trouble on at least one occasion. One of his friends sold one of his works to a buyer who believed it was a genuine antique. In 1994, the National Museum of China also mistook several of his works as the real deal.

But police investigations subsequently proved his innocence. The incident drew much attention to Gao’s skills but he says he now has more responsibility to shoulder for the art form because of these.

Gao’s factory in Luoyang deals with the mass production of regular artwork but he focuses on one of two Sancai items himself to help preserve the highest standards and pass on the beauty of the Chinese art form.

He also believes government support will help preserve the art. “There is still a lot I can do,” he says. “Every year, authorities in Yixing, Jiangsu province, hold festivals for their famous dark-red enameled pottery. With a favorable tax policy, artisans can benefit a lot, but Tang Sancai factories haven’t received support yet.”

After several years of hard work, Gao believes he has mastered another core Sancai technique fritter carving and the “dragonfly wing” effect. In 2008, his Sancai technique was listed as part of the national intangible cultural heritage.

“We have the responsibility to pass on techniques that are an indispensable part of our traditional culture before they are lost to us forever,” Gao says.