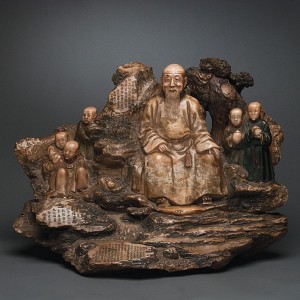 Lot description: Constructed from two large pieces of soapstone, depicting Tang Ying – the Qing dynasty imperial porcelain kiln supervisor – seated in the middle and wearing a dragon robe, flanked by two boys to his left and three boys to his right, all highlighted with pigments, set within a realistically carved rocky landscape in high relief with a small stream running through it, the stone featuring three lengthy inscriptions in clerical script to the front and one to the reverse, all with seals.

Provenance: Mr. and Mrs. Albert H. Kass, and thence by descent within the family. Purchased from a benefit auction for the Oakland Children’s Hospital Foundation held at The Claremont Hotel and Resort in Berkeley, CA. Reputedly donated for auction from a large private Claremont Hills estate during the 1970s. 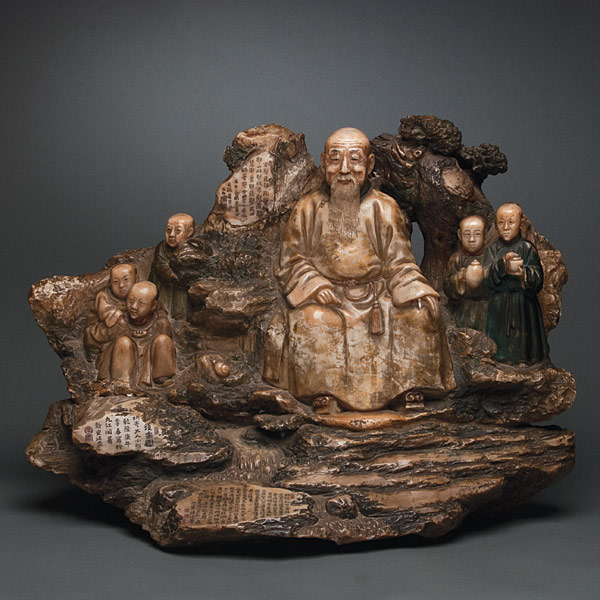 International telephone and internet bids poured in, while auction attendees saw live bidders rise to their feet, propelling the hammer price ever higher.

When the carving eventually sold to an anonymous telephone bidder, auction goers burst into spontaneous applause.

“I believe that this work of Tang Ying will continue to be a powerful force in the world marketplace. I also think that this auction speaks volumes on the explosive state of the current Asian antiquities marketplace; what appears to be its very bright future is a thrilling prospect for Michaan’s Auctions.”

The substantial piece dates to the Eighteenth Century and displays a range of detailed carving workmanship. Tang Ying is a rare subject matter in Asian works of art, making this an especially collector-worthy piece.

The seated Tang Ying is depicted wearing a dragon robe and a serene smile as he is flanked by five young boys. Inscriptions are carved in the stone around him, revering his character and the significance of the young boys. The scene is an artistic expression of the gentle Tang Ying being a worthy father figure as well as in the good fortune of bearing sons.

The carvings are well executed, realistically portraying the figures and the rocky landscape that they are positioned in. The entire piece is finished by various pigment rubs, further highlighting the fine detail apparent in the carvings.

The sale reflects the impact of Chinese collectors on the market place.

“A whole new sector of the art and antiques trade has sprung up to service this Oriental juggernaut,” writes Antique Collecting magazine.

“Vendors in this country,” the US-based magazine asserts, “receive pleasant shocks when artefacts that have lain unappreciated since great uncle George brought them back from a sojourn Out East suddenly become examples of things the Chinese avidly wish to reacquire.”

Michaan’s Auctions’ Scott Bradley acknowledged the significance of the sale: “The sale of the Tang Ying carving was the largest single sale I have presided over in my career. It has been a thrilling and exciting time to say the least.”

Who was Tang Ying?

Tang Ying (AD 1682-1756). Tang Ying, zi Jingong, hao Woji laoren, was a native of Shenyang, born into a family of Chinese Bannerman. Descendent of a bondservant serving directly under the emperor, Tang started his career working at the Imperial Household Workshops (Zaobanchu) at the young age of 16. During Kangxi’s reign he served in the Yangxin Dian (Hall of Mental Cultivation) where he learnt painting, poetry, calligraphy, prose, drama and other forms of scholarly arts. During Yongzheng’s reign he was promoted to the position of Vice Director of the Imperial Household Department and Chief Supervisor of the Imperial Workshop at Yangxin Dian in 1723.

In this new position he was solely responsible for overlooking all the artisans working in the imperial workshops. He started designing porcelain pieces for the imperial kilns at Jingdezhen while he was working in the Forbidden City. His designs earned him his next promotion in 1726 when he was sent to Jingdezhen, initially to work under Nien Xiyao (d. 1738) and then to become the Superintendent responsible for the complete production of porcelain at the imperial factory. Thus started his long and illustrious career at Jingdezhen which lasted over 25 years. In 1756, at the age of 75 and shortly before his death, he was given an audience by the Qianlong emperor at the Summer Palace (Yuanming Yuan) where he was given the honorific title Fengchen Yuan Qing (Chief Minister of the Imperial Parks Administration).