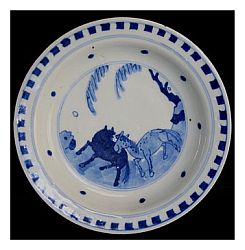 Tenkei or Tianqi wares refer to underglaze blue porcelain made in the unofficial kilns of Jingdezhen, Jiangxi Province, China during the reign of Emperor Tianqi in 17th century China. These wares were produced primarily for the purpose of export to Japan.

Tenkei wares were highly imaginative with decorations inspired by the contemporary paintings of the period. In particular, the master landscape painter, Dong Qichang as evidenced by the use of strong light and dark shade contrast of the blue.

Although the wares were not made using high quality clay or glazes, the spontaneity and creativity of the decoration made them popular export products. Under Emperor Tianqi, the porcelain bowls, vases and dishes were painted very freely, sometimes combining blue applied both under and over the glaze. These wares were much appreciated in Japan where they are called ko-sometsuke (old blue and white), and were mainly used as part of the Japanese tea ceremony culture.

About 1620 the Dutch took over Formosa and replaced the Portuguese as the purveyors of porcelain to the Near East and Europe. In the reigns of the last two official Ming emperors, Tianqi and Chongzheng, enormous quantities of blue and white porcelain were exported from China to Japan and Europe.

The Tenkei wares were typically of a strong build, suitable for export and of good material, with a clear white body often left unglazed on a flat base. The glaze is thick and rather bubbly, and the blue is deep, luminous, graduated in tone, very different from the uniform, pale blues of the preceding period. The shapes typically included various flatware and bowls.

The base marks typically consist of inscriptions from the previous reigns, in particular that of the Chenghua nianhao or imperial mark.