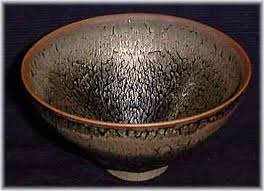 Stoneware with black or brown glaze were made in the same centres as celadon ever since the Six Dynasties. During the Song Dynasty, black glaze was produced in both the southern and northern parts of the country. The finest specimens came from Henan, Jiangxi and from Fujian Provinces. In addition to shadow blue ware, pure black glaze ware was made in Hutian Village of the Jingdezhen area. But it was not until the Yuan Dynasty that black ware was mass-produced. Wares produced at the Jizhou kiln of Jiangxi and Jian kiln of Fujian were renowned and were called Tenmoku glaze. The famous varieties were known as “oil-spot”, “hare’s fur”, and “tiny spots”. The black glaze ware features the use of a saturated solution of chemical compounds of iron to produce various kinds of natural crystal in place of artificial decorations. This crystalline glaze was a unique Chinese creation.

The addition of another kind of glaze material produced tortoiseshell-like spots on the black glaze of Jizhou ware as a result of the material dissolving and permeating the black glaze during the firing process. The glaze was a layer of transparent glass containing a few quartz particles. The “hare’s fur” glaze of the Jian Kiln in the Northern Song Dynasty was among the most famous black crystalline glazes in ancient times. Identification of a specimen fragment reveals that the cross-section of the glaze is transparent glass and there are small dark brown crystals in the “hare’s fur” on the surface of the glaze.

The decoration of the black wares of Jizhou consists mainly of patches, medallions, birds and plants. One of the most attractive motifs is a leaf impression in yellow ochre with very distinct leaf veins. This effect was achieved using a real skeleton leaf. The leaf was applied to a bowl already covered in an acid, iron-rich glaze; it was removed or burned in the kiln, leaving only its impression in ochre on a dark brown ground.

Another process consisted of covering the bowl with one glaze and painting a motif with another, so as to obtain two different colours, yellow or brown, for example. The colours would run together and the motif would become somewhat blurred. The rim of some bowls and vases is covered with a white slip clay under the glaze, or white ribs standing out in relief against the black body.

The northern part of the Song Empire, Linfen County in Shanxi Province, was also famous for its black glaze ware, particularly the “oil-spot” glaze. Apart from the Shanxi in northern China, both Hebei and Henan Provinces were producers of black glaze as well. They produced black glaze jars with engraved patterns, whose form and decorations were bold and plain with folk flavour.

The Japanese have always had a particular appreciation of the Chinese black wares. The name “Tenmoku” comes from the Japanese reading of the mountain Tianmu (Heaven’s Eye) that dominates the region of Hangzhou. In this port, the Japanese purchased the black wares made in the region of Jiangxi, Fujian Province. Legend has it, that it was a party of Japanese monks on a visit to the Buddhist monasteries of Tianmu who first brought these rustic bowls to Japan, so much appreciated by the masters of the famous tea ceremony. They gave a pleasant colour to the tea and could retain the heat well. These black tea bowls, called Jian, were equally appreciated in China. Not far from the kilns of the district Jianyangxian almost 1,250 pieces and 308 spurs have been discovered. These pieces were inscribed with Gangyu (Imperial use) and Jinjian (tribute).

In general, Tenmoku wares from Fujian province can be described as followed:

Black stoneware with reddish-brown tint, and thick body. Glaze is thick, shiny, dark brown or black with silver or bluish metallic lustre. The glaze stops above the base and forms drops and a thick edge. Lines and patches with “hare’s fur”, or “patridge feather” or “oil spot” patterns are present. The wares may also feature patches or speckles of iridescence, called yohen temmoku. The upper rim is sometimes circled with metal or with a white slip under transparent glaze. The base features a small, low, wide foot, sometimes inscribed with gangyu (Imperial use) or jinjian (tribute). Typical tea bowls are conical, deep and have irregular shapes.

Tenmoku wares from Jiangxi province have the following characteristics:

Buff or greyish stoneware with thin granular body. The glaze is finer than that of Fujian with no drops forming and generally comes right down to the edge of the base. Cream or blue-grey lines called “hare’s fur” or yellow patches called “tortoise shell”. The glaze is sometimes transparent all over. Decoration is only on the inside of the bowls. Motifs are painted with a brush, or done with paper cut-outs or leaf impressions. The motif is brown against a “hare’s fur” ground. Inscriptions are typically good wishes painted on the inside of the bowls. The base is unglazed with small, slightly rounded foot. Some swelling may be present of the bottom of the bowls.

Thin, greyish-white stoneware, sometimes with a brown slip under the glaze showing a the foot and on the base. The glaze typically terminates above the base. The characteristic patches are called “oil spots” or “rust marks”. Decoration of matte brown design on lustrous black ground, or white relief bands on a black ground. Rim sometimes covered with a white slip under transparent glaze. The base is unglazed with a small, wide and low foot. The wares can be found in various shapes including: bowls, bottles, jars and vases.

Black or purple Ding wares are very rare. Although they are mentioned in ancient texts, their existence was in doubt until some shards were discovered in Henan with the same porcellanous body as white Ding, but covered with a black or reddish-brown glaze called “soya sauce”. Some examples were also found in Japan. The texture of these pieces is very different from other black glazed stoneware from Henan, Jiangxi and Fujian.