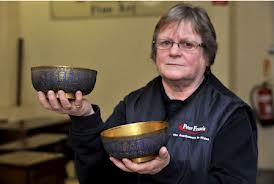 THESE Chinese bowls were estimated to fetch less than £100 when they went up for auction in Carmarthen — but sold for a whopping £23,000.

Auctioneer Nigel Hodson said he was stunned when he finally brought the gavel down at the Peter Francis general sale on Wednesday.

“We were flabbergasted,” he said.

“I looked at those bowls and I didn’t rate them at all, I’m embarrassed to say,” he said.

Mr Hodson, who has 40 years’ experience, said the two bowls were taken from a dresser filled with collectibles.

“It was from a beautiful display cabinet,” he said.

“The majority of the items from the cabinet, together with the cabinet itself, are going in our antiques sale on November 27.

“But I just didn’t think these were suitable and put them in the general sale.”

The highest of five bidders chasing the lot, a man from Leeds representing a London dealer, will have to pay commission on top of the £23,000 winning bid.

The auction house has since discovered the bowls are early 19th century cloisonne bowls from China.

Cloisonne is a process where the characters on the side of the bowl are on a raised wire — the bowl is then enamelled.

Cloisonne bowls are usually bronze, with copper guilding — but on these bowls it is gold.

“We sell a lot of cloisonne and a lot of it is much more beautiful than these,” said Mr Hodson.

“The majority of cloisonne seen at auction is touristy stuff which fetches tens rather than hundreds of pounds.”

“What it does do is vindicate the way we photograph and catalogue most of the small stuff, even in our small sales.

“It shows that by doing this and advertising them online, it brings people with money down to Carmarthen.

“The guy that bought them was from Leeds — he was buying for a London dealer, who I would think has already sold them.”