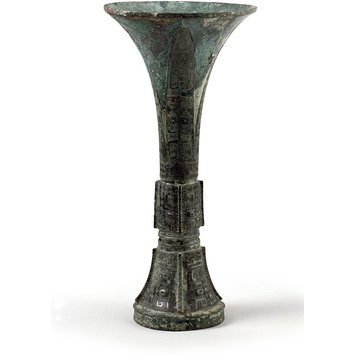 This vessel, called a gu in Chinese, is an exquisite example of bronze craftsmanship. It was made at the end of the Shang dynasty, about 1150-1050 BC, probably in the capital Anyang.

It was probably used as a communal drinking goblet or libation cup during the traditional rites for the ancestors celebrated by members of the royal family. The ownership and use of this and other ritual vessels were essential components of the ruling system under the Shang kings, and contributed to their power and authority.

Bronze vessels like this were kept in temples for ceremonies or buried in graves to denote status and prestige.

The cost, craftsmanship and labor required to produce these items further emphasises their value. The artisans had to first make outer moulds composed of several sections around a prototype of the finished bronze and then reproduce the patterns in reverse on the surface of the sections. They would then assemble the moulds around a core leaving a space between the outer and inner parts into which melted bronze would be poured. Once the bronze had solidified, the outer moulds and the inner core were removed.