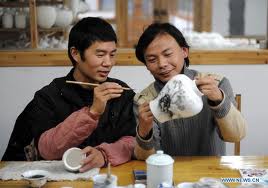 A jet-setting Jingdezhen ceramics trader who spoke on condition of anonymity is a small link in an increasingly global chain of top fakers, dealers and collectors.

“This bowl I would give 85 points out of 100,” said the boss of the guarded kiln complex, holding up a reproduction Qing dynasty bowl and placing it beside a near-identical prototype — a broken original pieced together from 280-year-old blue and white shards from the reign of the Yongzheng emperor.

“The auction houses and buyers often can’t tell the difference,” he added, running his finger over the smooth glaze and telltale blue Yongzheng reign mark on the base of the bowl — the finest copy of a now discarded batch of lesser fakes which could fetch over $100,000 in the open market, he said.

“A large number of fakes are finding their way into auctions everywhere,” said Anthony Lin, a former chairman of Christie’s in Asia who now runs his own Oriental art dealership.

Even in the Qing period (1644-1911), potters were making knockoffs, so called “houmenzao” or back-door copies of Ming masterpieces.

While fake ceramics are nothing new, the trade has become increasingly globalized as China has opened up and prospered.

Teams of potters in elite kilns, sometimes backed by foreign dealers with the know-how and distribution networks to plant fakes overseas in old family estates or country auctions, have upped the deceit to a new level over the past decade.

“In France, one of the areas where this has really hit the business, there’s a laundering of these fake ceramics because traditionally France has always had a large number of private collections … and in the old days that was where all the great finds and discoveries were made,” Lin added.

The increased ingenuity, reach and resourcefulness of the fakers has raised the risk of investing in Chinese imperial artwork, which now sells for millions in auction halls worldwide.

“It has spoilt the whole industry, because people have no confidence,” said Kaiyin Lo, an eclectic Hong Kong collector of Chinese art including ancient jades, calligraphy and ceramics.

A Qing enameled “swallows” bowl sold for nearly $19 million in 2006, making it the most costly Asian artwork ever auctioned.

“Certainly the rapid rise in prices and the wider participation of new buyers in the market have given greater incentive to fakers to do the best they can,” said James Lally, one of the leading U.S. dealers of Chinese artwork and a former head of auctioneer Sotheby’s in North America.

Adding to the risk is the difficulty of authentication. While scientific authentication including thermoluminescence testing to date the wares is available, fakers have devised methods using old clay and “radiating” their wares to age them artificially.

Sotheby’s, which subjects every ceramic it sells to checks by at least five to eight experts, says while decorative fakes abound, the truly “dangerous” fakes are much less commonly encountered.

“The exquisite matter that’s made to fool professionals, these we don’t see that often on the market,” said Nicolas Chow, head of Chinese ceramics and artwork at Sotheby’s Hong Kong.

“I think the game has been the same for the past few decades, but the knowledge needs to be updated … it’s always been a challenge and we’ll have to continue to keep those fakes from Jingdezhen in check, it’ll continue to be an area where we have to be increasingly vigilant,” added Chow.

The risk of being caught out by an expensive fake has driven collectors to pay heftier premiums for pieces of impeccable provenance with a verifiable sales history, or to buy through top auction houses like Sotheby’s and Christie’s which offer a five-year guarantee.

But the fakers who concoct seemingly convincing tales to bolster the perceived provenance of their freshly fired wares, often coming with faked old museum stickers, do sometimes succeed in catching the big players out.

One auction house recently withdrew a high-profile ceramics piece which had been displayed in New York. A catalogue had been printed with details of the supposedly rare Qing item but this was subsequently pulped at great cost.

The proliferation of auction houses in mainland China fueled by a wave of affluent neophyte Chinese collectors looking to get a fast buck has made fakes a special problem there given poor authentication and legal safeguards.

“If you buy without knowledge privately and are tempted by a low price then the risk will be larger,” Dong added.

“There are pieces that are publicized in the newspapers having set record prices (where) an experienced collector or dealer takes one look and says ‘not a chance that it’s old’. It’s just part of a game that’s going on,” said New York-based Lally.

Meanwhile, the faker in Jingdezhen who has other legitimate business interests but still enjoys “beating the experts” maintains a large basement inventory of top-quality fakes, mostly blue and white wares, gathering dust or being weathered outdoors, awaiting the right moment to surface.

“In the 1980s this wind really rose up in Jingdezhen, and it never stopped,” he said of the top fakers, who ironically are now the last gatekeepers of ancient Ming and Qing potting traditions that might otherwise have vanished into irrelevance.

“As long as there’s money to be made, it will never stop.”