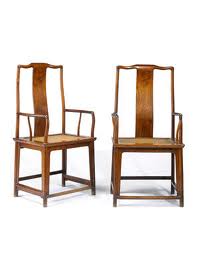 A financially challenged Anglican church in B.C. has received a remarkable $630,000 windfall after discovering that a pair of antique armchairs donated to the parish decades ago were actually 300-year-old Qing dynasty treasures from China.

The chairs, recently described as a “godsend” by the Rev. Robert Arril, rector of St. Matthias Anglican Church in Victoria, were sold Tuesday at a Sotheby’s auction in New York for about triple their estimated value of $180,000-$250,000.

An antique furniture buff’s fortuitous visit to the church two years ago for a Bible study session led to the identification of the chairs as rare pieces expertly crafted in 17th-century China.

They were donated to St. Matthias at some unknown point in the church’s history, possibly even before the congregation’s new building was opened in the 1960s.

In recent years, the parish has struggled to survive a 2009 schism over same-sex marriage in 2009 that saw about 95 per cent of the church’s former members leave to join a more conservative offshoot.

“It’s a remarkable discovery — such a fantastic turn of events,” Arril told Postmedia News in August. “It’s very significant for us as a struggling congregation, very meaningful. It will allow us to carry on the work we do.”

Following the congregation’s split three years ago, about 30 parishioners remained at St. Matthias. The Anglican diocese of B.C. retained ownership of the church building and all of its assets.

Arril recalled sitting in one of the armchairs at the back of the church as he led a Bible study group in 2010.

“I remember this one person looking very keenly at me,” he said ahead of Tuesday’s sale. “Then I realized she wasn’t looking at me at all — she was looking at the chair.”

The woman, “an aficionado of Chinese antiquities,” later examined the chairs and sought professional opinions about their potential value.

Her suspicions that they were authentic 17th-century treasures were later confirmed by several Vancouver-area experts and by a Sotheby’s curator of Chinese antiquities.

“We are all very grateful to the person whose sharp eyes were able to see something beyond our Bible study,” Arril said last month. “She’s made a real difference in this community.”

The rector said at the time that various programs sponsored by St. Matthias, including outreach services for single mothers, homeless people and low-income seniors, would benefit directly from the sale of the armchairs, which was backed by the congregation as well as by Anglican diocesan officials.

“It’s a godsend — a real boost that will allow us to continue growing as a faith community,” said Arril.

The “huanghuali yokeback armchairs,” as they were labelled in the Sotheby’s sale catalogue, are made of wood from a rosewood-family tree favoured by ancient furniture-makers for its durability and beautiful texture. The U.S. auction house described the B.C. chairs as well-preserved, “particularly fine” examples of “one of the core elements of the classical Chinese household.”