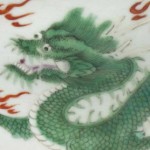 One of the earliest symbolic motifs from antiquity which continued to have resonance was the ultimate symbol of power, the dragon (emperor), and his consort, the phoenix (empress).

The form of rank and importance became formalised in the Yuan period (1279-1367) when three-clawed (princely), and five-clawed (Imperial) dragons first appear in jade and porcelain before male and female Imperial beasts were conjoined in symbolic Imperial union in the early Ming.

Into the Qing court, the combination of dragon and phoenix was particularly popular in Kangxi famille verte ware.

The Chinese dragon, unlike his European counterpart, was believed to be a beneficent creature. He was not only the essence of yang (male) properties, but is also a bringer of rain. The dragon was believed to rise from winter hibernation among the waves at the Spring Equinox to bring the rain necessary to water the crops. The dragon was also one of the si ling – creatures of the four quarters – the green dragon representing the east, while the west was represented by the white tiger, the south by the red bird, and the symbol of the north was the so-called dark warrior, usually depicted as a tortoise and snake combined.