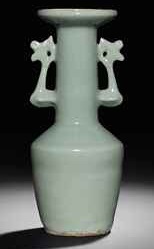 The mallet-form vase, or kinuta vase, was greatly admired by Japanese as well as Chinese patrons during the Song and Yuan periods for the fine quality of its celadon glaze. Indeed, the name kinuta, although referring to a shape, has come to be specifically associated with the most esteemed Longquan glaze colour.

It has been suggested by several scholars that this shape, despite resembling a paper mallet, may in fact have been introduced to China as a glass vase or bottle from the Islamic west, probably Iran.

Fragments of glass vessels of this shape were found in 1997 among the excavated material from the cargo of the Intan wrecked ship excavated off the Indonesian coast. This ship is believe to date to the Northern Song period.

The mallet vase shape is known in three main variants from the Longquan kilns. Very rarely it was made without handles, as in the case of a vase in the Palace Museum, Beijing. The majority of these vases, however, were made with two elaborate handles, either in the form of phoenix, as in the case of the current vase, or in the form of fish, as exemplified by another vase in the Beijing Palace Museum.