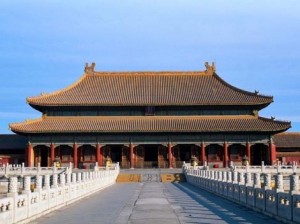 The administrative center and imperial residence during the Ming and the first two reigns of the Qing, the Qianqing Gong [Mansion of Heavenly Purity] kept its symbolic importance long after the third and fourth Qing rulers, Yongzheng and Qianlong, moved out.

Completed in 1420, the hall is nine bays wide and five bays deep. It was a first rank building of the Inner Court. Last renovated in 1798, the interior preserves much of its 18th century layout today. In the central bay is a three-step platform on which is the emperor’s throne and its accessories. Although there were many thrones for the emperor inside the Inner Court, this one continued to be significant because of its location.

Qianlong held annual New Year banquets at the hall to entertain princes, imperial males, key officials, and on separate occasions his mother and other imperial ladies, in addition to giving audiences to state visitors. One of the largest formal meals in Palace history, the “Thousand Elderly Banquet,” was held in and around the Qianqing gong in 1785. On that occasion almost four thousand males 60 and older were the emperor’s guests. The hall also served as the farewell place for the deceased emperor; part of the funeral service and the official wake was held there.

The wooden lintel board above the throne bears four characters reading, from left to right “Zhengda guangming” [Be transparent and fair]. The calligraphy is that of the Shunzhi emperor. Copies of the same phrase were used to decorate all imperial buildings with similar ceremonial functions. The lintel played a central role in the system for designating the next emperor, as introduced by Yongzheng and continued by Qianlong. In order to avoid fratricidal quarrels among his sons after his death, Yongzheng named his choice in a decree that was placed in a box and stored behind the lintel board, high above the throne room floor. Another copy of the decree was kept secretly with the emperor alone. When the time for the announcement came, which usually meant at the emperor’s death bed, the two copies had to match in content as witnessed by key officials.

Against the eastern and western walls are tall cabinets that stored daily records [shilu] of the previous emperors, jade books that bestowed imperial titles, and some seals. Several times Qianlong ordered his staff to sun the records and dust the jade books.