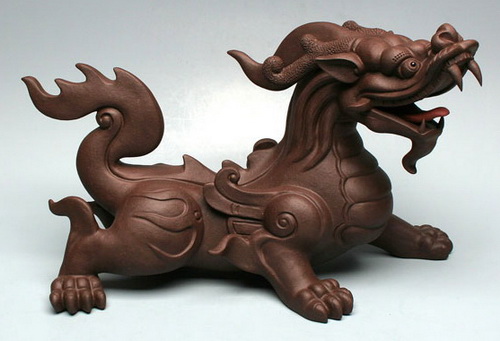 One of China’s more bizarre mythological creatures, the Pixiu is a very powerful creature which is very helpful to humans. Its appearance has changed greatly over the centuries, which often gets its images confused with that of the Qilin.

For the Chinese people, it is an important part of fengshui and is thought of as an auspicious creature which brings wealth to people.

They are fierce creatures. They have the head of a Chinese dragon, the body of a Chinese lion, and the legs of a Qilin. Some are depicted with wings. They are generally depicted with a big mouth with fangs, fat belly, and no anus to indicate that they are always hungry and are filled with gold and good fortune, which will never go away.

It is this aspect that make them very popular with businessmen and it can be seen in many shops and banks. Originally, they were depicted with two antlers. As time went on, their appearance evolved so that the males had a single antler and female had two antlers. Today, there is no distinction made between male and female and either can be depicted with one or two antlers.

They are very powerful and fierce in battle. So much so, that they were the symbol of the Chinese army. They are very protective of their master. They destroy evil spirits and malicious ghosts by eating them. The spirits become gold in its belly.

According to legend, they broke a law of heaven, so the Jade Emperor was forced to punish it by restricting its diet to gold and sealing its anus. Because of this, they can ingest gold, but cannot get rid of it. This is why it is considered an auspicious animal because of its ability to acquire and preserve wealth. It is said that they are able to assist people who are suffering from bad fengshui.

They are commonly crafted into Zisha (Purple Clay) tea pets. It is believed that by having a Pixiu tea pet that you will attract lots of money.