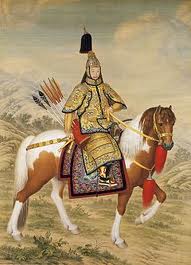 After his accession to the throne in 1735 the Qianlong Emperor combined his personal passion for collecting with a concern for self-presentation and efforts to further his political goals as Emperor. Art collecting and proven expertise in the fields of calligraphy and painting were part of this ambition. Moreover the Qianlong Emperor saw himself in the role of preserver and restorer of the Chinese cultural heritage. This enterprise also entailed the Emperor’s personal assessment of the works and his correction of possible mistakes, such as false attributions or iconographic errors. The Emperor bought up the great private collections of the seventeenth century and reintegrated their treasures into the imperial collection. Most of the several thousand jade items in the imperial collection date from his reign. The Emperor was also particularly interested in collecting ancient bronzes, bronze mirrors and seals, which he caused to be documented in comprehensive and lavishly presented catalogues. The impressive assemblage of European clocks which he likewise had copied in his court workshops also bears witness to his passion for collecting. This passion is, however, most clearly revealed in the innumerable small curio cabinets in which he kept thousands of smaller items.

The Qianlong Emperor was a passionate poet and essayist. In his collected writings, which were published in a tenfold series between 1749 and 1800, over 40,000 poems and 1,300 prose texts are listed, making him one of the most prolific writers of all time. There is a long tradition of poems of this sort in praise of particular objects (yongwu shi), and the Qianlong Emperor used it in order to link his name both physically and intellectually with ancient artistic tradition. He also regularly added poetic inscriptions to the paintings of the imperial collection, following the example of the emperors of the Song dynasty and the literati painters of the Ming. They were a mark of distinction for the work, and a visible sign of his rightful role as Emperor. Most particular to the Qianlong Emperor is another type of inscription, revealing a unique practice of dealing with works of art that he seems to have developed for himself. On certain fixed occasions over a long period he contemplated a number of paintings or works of calligraphy which possessed special meaning for him, inscribing each regularly with mostly private notes on the circumstances of enjoying them, using them almost as a diary. They became part of his life and he took them with him on his travels in order to compare paintings with the actual landscape, or to hang them in special rooms in palaces where he lodged, to inscribe them on every visit there.