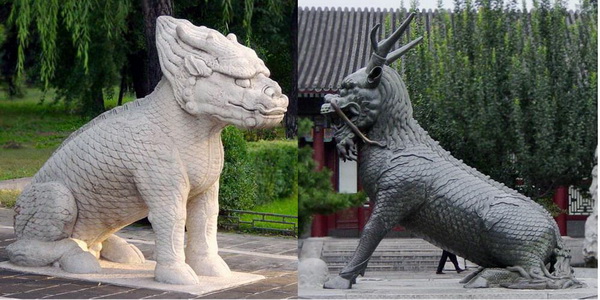 One of China’s most important mythological animals, the Qilin is an auspicious animal believed to bring prosperity, serenity, and male offspring. The Qilin is occasionally described as the “Chinese Unicorn” because it is sometimes depicted with a single horn. It is said that the Qilin will appear with a sage or immortal and is sometimes the mount of an immortal.

The appearance of the Qilin has changed with each passing dynasty. During the Ming Dynasty (1368-1644), the Qilin was had the hooves of an ox with a dragon like head topped by a pair of horns and flame-like head ornaments. During the Qing Dynasty, the Qilin was a far more fanciful animal, which had the head of a dragon, with the antlers of a deer, fish scales, ox’s hooves, and a lion’s tail.

Although appearing vicious, the Qilin is generally gentle unless confronted by evil people, when flames will erupt from its mouth and it becomes extremely fierce and will use its magical powers to destroy the wicked. The Qilin is a vegetarian and has a very quiet nature and it is said that it can walk on grass without disturbing a single blade. The Qilin, according to legend has the ability to walk on water and will only appear in areas ruled by wise and kind leaders, whether it is a country, or a single household. 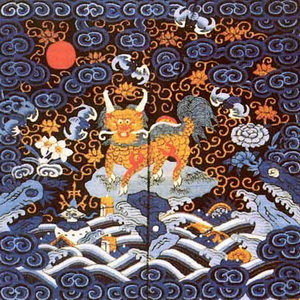 The earliest recorded mention of Qilin was in the 5th century BC. The Qilin has appeared in works of history and fiction ever since. It is believed that the Qilin was originally an artist’s imagination of a giraffe, similar to the stone lions, or Fu Dogs which guard Chinese gates.

The design of the stone lions was created using verbal descriptions of African lions. Carvings and statues of Qilin can be found throughout many of Beijing’s imperial sites. In the Summer Palace for example, the Qilin is found on roofs of palaces and temples, on walkways, and crafted into large bronze statues to guard buildings.

The famous Daoist book ‘The Eight Immortals Cross the Sea’ says that the immortal Li Tieguai rides a Qilin. During the Qing (1644-1911) Dynasty, the Qilin was depicted on the Mandarin Square, a symbol of rank placed on the chest and back of officials clothing, of military officials of the first rank.

Most people know of the Chinese Dragon and Lion dances which are performed on important festivals, but few know of the Qilin Dance. In the hierarchy of Chinese dances, the Qilin is second only to the dragon. The dance’s movements include fast and powerful movements of the head. It is considered to be a very difficult and physically demanding dance due to the weight of the head and the strong bursts of energy.