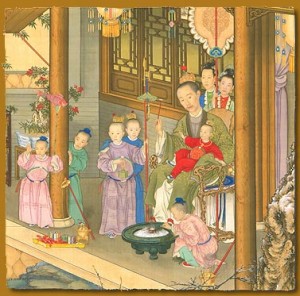 When the Qing rulers—Manchus from northeast China—took control of the empire, they inherited the Forbidden City palace from the Ming dynasty. They also inherited a set of powerful symbols from the Ming who, like the majority of Chinese, were of Han ethnicity. These symbols, along with Manchu-based symbols, underscored the emperor’s power and majesty, and appeared on nearly everything he touched, wore, ate from, or sat upon.

To successfully rule the vast Chinese empire, an emperor had to be many things. A highly educated man with diverse talents, Qianlong pushed himself to excel in every aspect of ruling. He was a tireless bureaucrat with a mind for detail; a “hands-on” administrator who traveled the realm extensively, reviewing everything from dams and dikes to fortifications; and, as befitted his Manchu ancestry, an excellent huntsman, excelling in archery and horseback riding.

The emperor lived in a family that, to us, might appear unusual: over his lifetime, Qianlong had twenty-six children and forty wives, or consorts. While women and children in the emperor’s family lived in the palace, adult males generally did not—the only men permitted in the residential areas of the palace at night were castrated servants, called eunuchs. For the emperor’s consorts, every aspect of day-to-day life was ordered according to rank—and social rank was determined solely by the emperor.

The Private World of the Emperor

Qianlong was both a conservator of cultural traditions and a restless innovator in politics, the arts, and the sciences. Qianlong practiced calligraphy, reviewed and commented on thousands of works of art, oversaw a revised edition of existing Chinese literature, and composed some 44,000 poems in his lifetime. This study, support, and patronage was both personal—Qianlong took a sincere interest in the arts—and political, as it showed the emperor as a fit ruler who was learned in all things.

Qianlong gave his support to many religions: Tibetan Buddhism—practiced by Qianlong himself, Manchu Shamanism—the religion of the Qing ancestors, Daoism—China’s indigenous religion, Han Buddhism—practiced by the majority of China’s population, as well as sacrifices to ancestors and local deities, and even Christianity and Islam. Qianlong was involved in these religions in different ways: in some cases, as a benefactor, providing funds for building temples. In other cases, he participated directly, praying at shrines or making sacrifices.