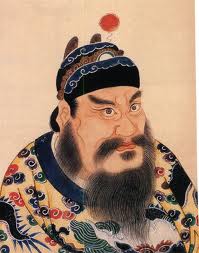 Buried deep under a hill in central China, surrounded by an underground moat of poisonous mercury, lies an entombed emperor who’s been undisturbed for more than two millennia.

The tomb holds the secrets of China’s first emperor, Qin Shi Huang, who died on Sept. 10, 210 B.C., after conquering six warring states to create the first unified nation of China.

“The big hill, where the emperor is buried — nobody’s been in there,” said archaeologist Kristin Romey, curatorial consultant for the Terracotta Warrior exhibition at New York City’s Discovery Times Square. “Partly it’s out of respect for the elders, but they also realize that nobody in the world right now has the technology to properly go in and excavate it.”

Qin Shi Huang (pronounced “chin shuh hwang”) was born in 259 B.C., first son to the king of Qin, one of six independent kingdoms inside modern China. These kingdoms had been warring for more than 200 years, but through a combination of military strength, strategy and natural disasters, Qin Shi Huang conquered them all, proclaiming himself not just a king, but also an emperor — the first of China.

Scholars still debate the details of how this occurred, and what unique tactics allowed the Qin emperor to achieve what no one had managed before.

When he died, Qin Shi Huang was buried in the most opulent tomb complex ever constructed in China, a sprawling, city-size collection of underground caverns containing everything the emperor would need for the afterlife. The ancient Chinese, along with many cultures including ancient Egyptians, believed that items and even people buried with a person could be taken with him to the afterlife.

But instead of burying his armies, concubines, administrators and servants with him, the Qin emperor came up with an alternative: clay reproductions.

In 1974, a group of farmers digging wells near Xi’an, China stumbled upon one of the most shocking archaeological discoveries of all time. The life-size terracotta solider they dug out of the ground turned out to be just one of an army of thousands, each utterly unique, with individual clothing, hair and facial features. 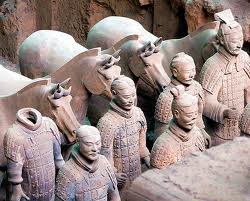 For almost four decades, archaeologists have been excavating the site. So far, they’ve uncovered about 2,000 clay soldiers, but experts estimate there are more than 8,000 in total.

“They’re going to be digging there for centuries,” Romey predicted.

Still, scientists have yet to touch the central tomb, which holds a palace containing the body of Qin Shi Huang.

To open the tomb?

When excavating [the soldiers] in the ’70s, the minute they were exposed to air and sunlight, the pigment just flaked off. Now science has figured out a new technique where they can actually preserve the paint as they excavate.

Perhaps, if science advances enough, that excavation wouldn’t cause serious damage to the burial site, and the tomb will finally be opened.

Ancient writings say the emperor created an entire underground kingdom and palace, complete with a ceiling mimicking the night sky, set with pearls as stars. Pits full of terracotta concubines have never been discovered, though experts predict they exist somewhere in the complex.

And Qin Shi Huang’s tomb is also thought to be encircled with rivers of liquid mercury, which the ancient Chinese believed could bestow immortality.

That moat of mercury also presents another reason why archaeologists are loath to explore the tomb just yet — doing so would likely be very dangerous, according to soil samples around the tomb, which indicate extremely high levels of mercury contamination.

In the end, scientists and historians must always weigh their desire to know more with the damage such inquiry would cause.