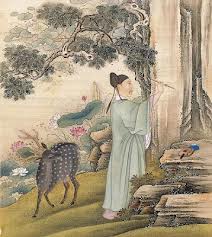 The Yongzheng Emperor’s official persona was that of a distant, secretive and ruthless monarch, who is still considered not nearly as interesting a historical figure as his father or his son. The many unofficial portraits and pictorial records he commissioned indicate an eccentric yet sophisticated ruler who, unlike the Kangxi and Qianlong Emperors, dared to deviate from approved patterns and paths.

The emphasis on works of art, in addition to books and scrolls, in many paintings commissioned by the Emperor was a significant departure for imperial settings. The Yongzheng Emperor was the first true art-lover among the Manchu rulers. Unlike the more practically minded Kangxi Emperor, who believed himself duty-bound to look after items inherited from the past and to uphold standards of craftsmanship, the Yongzheng Emperor passionately cared for and lived with works of art. He had the Jesuit court painter Giuseppe Castiglione (1688—1766) paint veritable ‘portraits’ of favourite porcelain vases, both ancient and modern.

From the very first year of his reign, the Yongzheng Emperor commissioned items from the Palace Workshops, whose output changed in nature as a result. Whereas his predecessor had been interested in the mastery of technical challenges, he took pride in the artistic aspect of their creations. Although Chinese artefacts were traditionally produced anonymously, the names of well over one hundred craftsmen are recorded from the Yongzheng period. The Emperor knew his artisans by name, personally commented on their work and specially rewarded creations that he considered outstanding.

Since those seemingly intimate representations of the emperors at leisure, known as ‘pictures of pleasurable activities’ (xingle tu), were conscious manifestations of a personality, the choice of activities depicted is emblematic. Different emperors presented themselves in different lights. As the role of the cultured literatus was important to the Kangxi Emperor, so was that of the collector or guardian of the antique to the Qianlong Emperor. The Yongzheng Emperor’s message is less easy to read.

The series of fourteen ‘costume portraits’ are surely the most idiosyncratic self-representations of any Chinese ruler. Including auspicious or otherwise significant creatures, these depict a man of different capacities: intellectual, spiritual, magical and physical. They show a Confucian scholar with books, writing brush, or qin (a long zither); a Buddhist itinerant monk; a Tibetan lama meditating in a cave; a Daoist immortal with a gourd hanging from his staff; a recluse listening to the waves; a fisherman dreaming; two figures in possession of magic charms: a pearl for summoning a dragon (that is, rain), and a peach of immortality; and three foreigners: a Mongol nobleman, an archer perhaps of a nomadic tribe, and a European hunter wearing a wig.

The Yongzheng Emperor’s fascination with antiquity, his collecting of antiques and the resulting passion for archaism on the one hand, and his personal taste, demand for quality, and engagement of contemporary craftsmen on the other, gave Qing art its identity and shaped our idea of Chinese art in general. His legacy left little for his successors to develop, and the Qianlong Emperor concentrated on increasing works’ scale and ostentation, and emphasising their message. As the son knew better than his father how to project his own image, it was he who earned admiration for much that he merely copied; and by marking, stamping and inscribing works of art, he connected himself inseparably with a patrimony that he had inherited. The Yongzheng Emperor may have neglected the cultivation of his own image, which pales in comparison to that of his father and son. It seems that his measure has not yet been fully taken.