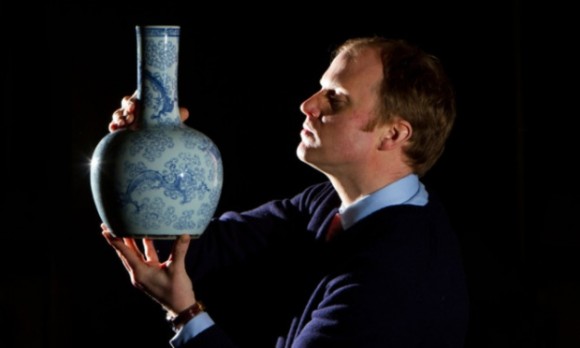 The growth of China’s economy is having a spin-off benefit for the UK antique trade.

Prices have rocketed as wealthy Chinese buyers scour the internet to buy back pieces of art exported from China to the west.

“They want to buy back their heritage,” said auctioneer and Asian art expert Nick Burns, of Perth.

“They have bought into the western way of life and with huge disposable incomes collectors are taking pieces back to China.”

He experienced the spiralling prices at the most recent sale at Lindsay Burns & Co auctioneers when Chinese buyers competed over a number of lots.

A blue and white bottle vase decorated with dragons and cloud scrolls went for £9,000 to a Chinese bidder.

Although marked with a Chenghua mark from the famous Ming Dynasty of the 1400s, Mr Burns thought it to be later but this DID NOT concern the buyer.

The vase was bought by a Perthshire woman about 20 years ago at a small country auction for a modest sum.

The marks and symbolism are important in assessing the value and Mr Burns believes many people could cash in on the boom.

He knows just how high prices for Chinese goods can soar — a couple of years ago at the King Street auction house in Perth a vase made £55,000.

Condition is not always a vital element, either, with a red Chinese vase which had been converted into a lamp by drilling through the side selling for £4,000 at the most recent sale.