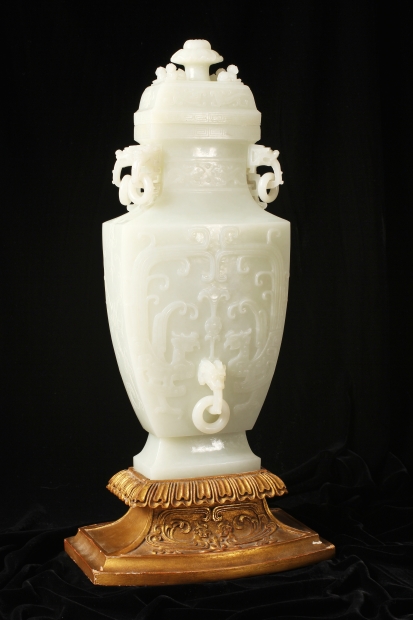 The winning bidder bought the piece over the phone from Hong Kong, and then picked up two more high-end items — a “pale” celadon jade vase for $598,000, and a “light” celadon jade incense burner for $299,000.

The Hong Kong bidder paid $1.713 million for the three items, which is more than the $1 million-to-$1.5 million estimate of the entire 640-lot auction. In the end, Maynards’ Antiques and International and Asian Art Auction grossed $2.9 million, including buyer’s premiums.

Auctioneer Hugh Bulmer said there were five telephone bidders going after the big items. Two bidders battled over the $816,000 vase, one in New York, one in Hong Kong.

“One of the bidders was trying to burn off the other one, so he was jumping in $50,000 increments, then going slow for a while,” Bulmer said. “It was a bit more theatre than just taking standard bids. When you get up that high, you really wait for the guys on the phone to start making the moves. And they were.”

To the layman, a pale celadon jade piece looks like white jade. It’s rare, especially when it dates to the Qianlong period (1730-95) like the two high-end vases.

“It’s all about colour today, and condition,” said Bulmer. “The mutton (potpourri) had a slight flaw in the stonework — it wasn’t damaged, but it had a slight flaw — and I think that put off the main buyers. But the colour and the size of the (vases) drew them out.”

The vases, incense burner and potpourri were among five jade pieces put up for sale by the Sabet family. The Sabet pieces sold for a combined $2.1 million, which pleased a family member who was in the live audience.

“They were there, giving out chocolates,” Bulmer said with a laugh.

About 150 people were in the audience, and there were 1,500 people registered to bid from 50 countries. People bid live, on the phone, and over the Internet.

“The big pieces were bought on the telephone, rather than the Internet,” said Bulmer. “Big difference. We want to get the really serious bidders to bid on the telephone. Then we have contact with them and can talk with them. Other bidders online, we give them a ceiling of say $50,000, and unless they talk to us they can’t spend more than that.”

Another item that had attracted attention, a 22-karat gold Chinese Imperial Order of the Double Dragon medal, sold for $69,000.