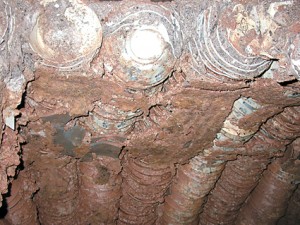 The tomb was discovered by a team of road workers in E’Ling Street, in the Yuzhong district of Chongqing. When the first bowl was dug out, the workers thought nothing of it and discarded it, but as more bowls emerged, they realized they had discovered something unusual and called the city’s cultural relics administration.

The archaeology department sent a team to investigate. They discovered a tomb constructed from porcelain bowls. Lying just 60 centimeters under the road surface, the bowls had been piled together to form a tomb. The coffin and other funerary objects were then placed inside.

The bowls and the basic structure of the tomb were scarcely damaged, despite lying directly under a road, but the contents had been stolen by tomb raiders. Almost all the funerary objects had been taken, and the identity of the person buried there will probably remain a mystery.

The bowls remained intact because they were stuck together very tightly, and secured with sticky rice and cement, which helped the tomb retain its shape. Archeologists said that it would be a very difficult task, requiring chemical solvents, to separate one bowl from the others.

The bowls are Qing Dynasty qing hua ci bowls, very common in that period. The images and flower patterns on the porcelain look brand new. Some experts speculate that the reason for using bowls as construction materials was that the occupant of the tomb would have something to eat in the afterlife.

Archeology team leader Li Dadi said that this kind of tomb is very rare in Chongqing and was probably constructed by occupants of a Qing Dynasty migrant settlement. He was unable to say for certain where the migrants had come from, but similar, somewhat smaller, bowl-tombs had been found in Fujian Province.