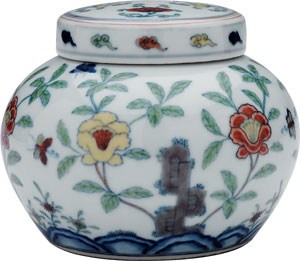 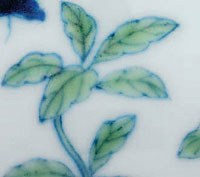 Most of the Harvard Museums’ forgeries live in the dark in storerooms. Robert D. Mowry, Dworsky curator of Chinese art and head of the department of Asian art, occasionally exhibits the jar to your left in the Sackler Museum galleries as a beautiful example of early-eighteenth-century Chinese porcelain. It is that, but it purports to be something rarer and pricier—a work of the late fifteenth century. The reign mark on its bottom lies about its age.

The jar below is an authentic fifteenth-century work. It is missing its cover. When this treasure came to Harvard in 1979, it had lost its identity and was miscataloged as an eighteenth-century work, but Mowry established its venerability through scholarly detective work. Both jars are done in what is called the doucai (or dovetailed) technique—decoration painted in bright overglaze-enamel colors within underglaze cobalt-blue outlines—a technique that had its start in the fifteenth century. 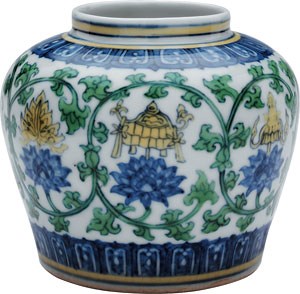 About 100 Chenghua doucai porcelains are present and accounted for worldwide —”cups, bowls, and such, but these little jars, of which only 12 are known, have always been celebrated as the most desirable Chinese overglaze-enamel pieces,” says Mowry. “They were revered from the time that they were made and, because there weren’t very many of them, faked virtually from the beginning. 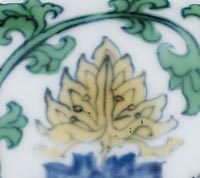 The very best forgeries were made in the first half of the eighteenth century.” Harvard’s Chenghua jar is the sole known example of this particular pattern to have survived intact, the rarest of the rare. The eighteenth-century jar copies the pattern of another of the 12 known jars, now in the collection of the Percival David Foundation, School of Oriental and African Studies, University of London.

What distinguishes the authentic jar from the forgery? Shape, most conspicuously, and the shapes of both jars are typical of their periods. “The Chenghua jar has a short, vertical neck and broad shoulders, which curve down and slant inward as if it’s a person standing with shoulders pulled back, as your mother said to do when you were a child,” says Mowry. “The globular eighteenth-century jar has slopping shoulders and a bulging belly. Whether the imitators simply liked the globular shape better and thought no one would notice, or whether they didn’t fully understand what they were copying, we’ll never know.”

Mowry describes the drawing on the earlier jar as “a little bit hesitant. It’s not that the imperial porcelain makers were completely inexperienced in the use of the brush. They had been producing blue-and-white porcelain for more than a hundred years. But they were not practiced in drawing paired outlines of the same curvature, very close together, and in very thin lines, into which they would fit the overglaze-enamel colors in a succeeding phase of production. The long outlines of the scrolling stalks, for example, tend to be a series of hesitant short strokes joined together. The creators of these Chenghua pieces also haven’t learned when their brush will expend all of its cobalt solution. One can see clearly where they have just dipped the brush into the cobalt, and the tonality of the outline is dark, and where they have let the brush run out of cobalt so that the outline virtually disappears. By contrast, the eighteenth-century artist is a master of the brush. All his little lines are beautifully drawn—hair-thin, absolutely parallel, and done with a fluid, continuous brush stroke. All hesitancy is gone. Finally, while one would not characterize a Chenghua doucai piece as messy, the colors sometimes spill ever so slightly out of their underglaze blue outlines. In the eighteenth century, such a thing is most unlikely to happen.”