The National Museum of China, one of the biggest museums in the world, is home to over 1 million cultural relics, including bronze, jade and gold artifacts, pottery, porcelain, paintings and calligraphy-counting them all could take several years. Check out the following top 10 treasures you mustn’t miss out on when visiting the museum. 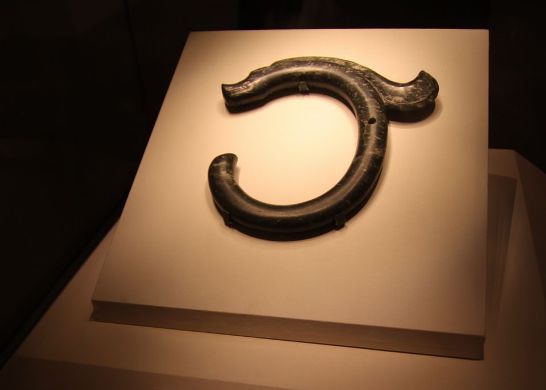 Excavated in 1971 from Ongniud Banner of Chifeng City, Inner Mongolia Autonomous Region, the jade is known as “The First Dragon of China” as it is the earliest and one of the most splendid of jade carvings. The distinctive shape of the dragon in a reverse C, featuring a long extended snout, small head and upturned nose with a flat end and two nostrils, is quite remarkable and the vivid engravings astonish people to this day. 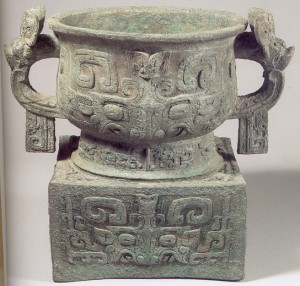 Excavated in 1976 in Lintong County of Shaanxi Province, it is the earliest Western Zhou bronze uncovered to date. During the Shang Dynasty (16th-11th century BC), a gui was used for cooked rice and other foods, or sometimes even used together with a cauldron or ding to act as a ritual vessel. Four lines with 32 characters were engraved inside of its base, telling the history of King Wu’s conquest over Yin. 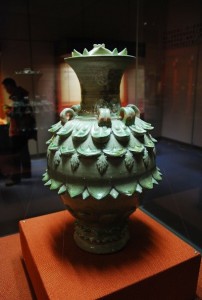 Excavated in 1948 from the Feng family tombs in Jingxian County of Hebei Province, the vase features a delicate shape as well as various vivid lotus carvings. As we all know, a lotus is the Buddhist symbol for purity which, in the case of this vase, guides the spirit of the deceased. The unique design is excellent for studying the ceramic production of the Northern Dynasties period. 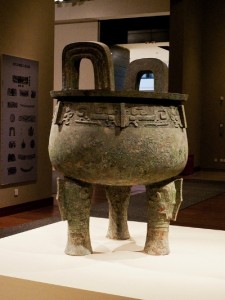 Excavated in the 1920s from Huixian County in Henan Province, it remains the largest Shang-period round ding found to date. The cauldron got its name because of the two characters on its inside: “Zi Long.” This ding has a thick and heavy body, featuring six paired animal faces, and a deep belly. The exquisite engravings reflect the high level of late Shang bronze technology and art. Because of their different shapes and long history, the Zilong and Houmuwu cauldrons are referred to by some scholars as the “Square and Round Masterpieces.” 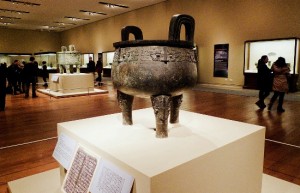 Excavated in 1891, during the early Daoguang reign period (1821–50) in Meixian County, Shaanxi Province, Da Yu (ding) is the largest item of Western Zhou bronze found to date. Da Yu (ding), Mao Gong (ding) and Da Ke (ding) are the three bronze treasures of Western Zhou Dynasty. This cauldron has a circular body, a restrained mouth and carries a total of 291 characters inside, making it a valuable contributor to the study of the Western Zhou. 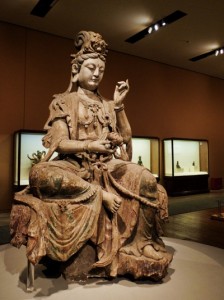 This sculpture represents Avalokiteshvara, also known as Guanyin in Chinese Buddhism. It was bought by the State Administration of Cultural Heritage in 2005. The bodhisattva appears relaxed and serene with her eyes full of mercy, making her the personification of kindness and beauty. Up till now, museums in the United States have over 20 such wooden sculptures. For China however, this first one has definitely filled a gap. 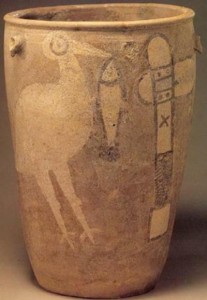 Excavated in 1978 from Yancun Village in Linru County, Henan Province, it stems from the Yangshao Neolithic Culture. A colored jar was an artifact for a leader of a tribe to be buried with. Its white pigment signifies the tribe leader, the fish represents the enemy and the axe stands for power. It is a rare and valuable example of painted pottery from this early period. 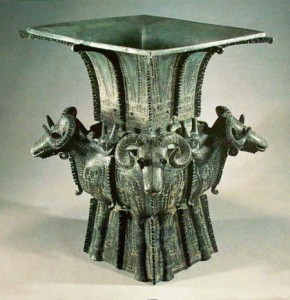 Excavated during the spring of 1938 from Ningxiang County in Hunan Province, this vessel got its name from the rams’ heads with curly horns featured on the shoulders of the four corners. The unbelievable craftsmanship and gorgeous design represent the excellent bronze-making techniques of the Shang Dynasty. 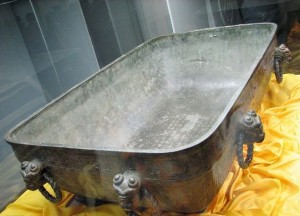 Excavated during the Daoguang reign period (1821–50) from Baoji in Shaanxi Province, and donated by Liu Suceng in 1950, this pan is valuable for its weight as well as its literary and artistic value. The pan is a water vessel common used during the late Western Zhou period. The bottom of the pan features 111 engraved inscriptions which tell the story behind the bronze. 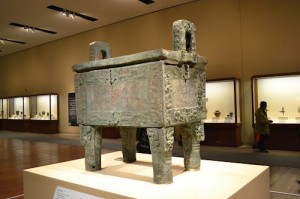 Excavated in 1939 from Wuguan Village in Anyang City, Henan Province, the four-legged bronze Houmuwu square cauldron, also known as Simuwu Ding, measures 133 cm in height and weighs in at 875 kg, making it the world’s biggest bronze ware item ever excavated. The cauldron has straight sides, a deep belly and a flat base. Its design is a prime example of the Shang Dynasty’s fine techniques.