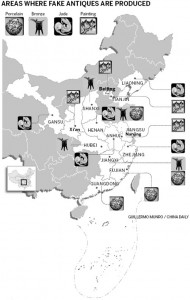 In early March, Artron, a Chinese arts website, published a special report “Tracing China’s Faked Antiques”, on art counterfeiting, including comprehensive information that maps where a variety of fake artworks are produced.

It will come as no surprise to seasoned collectors as well as novices that fake antiques in China far outnumber authentic artifacts. The nation’s counterfeit industry has developed into a complete production line involving tens of millions of people. The report explains in detail where the hottest-selling fakes come from.

Most of the workshops are in rural areas. Counterfeit pottery and porcelain comes from across the country, but the real hot spots are in Jiangxi, Henan, Zhejiang and Guangdong provinces.

Bogus ancient jade and bronze artifacts come mostly from eastern and northwestern areas. Counterfeit paintings and calligraphy works are concentrated in the surroundings of highly cultivated cities like Beijing and Tianjin.

“The vast amount of information on fake antiques is simply overwhelming,” said Wang Linjiao, author of the report and editor of the Artron website, “but I already have some idea of what the final map will be like.”

Wang said in her report that the rampant growth of the counterfeit industry and market is due to the ever-increasing interest in art collecting in China, particularly in the past 20 years.

China became the largest antique investment market by sales, surpassing the United States and Britain in 2011. Chinese collectors now number about 100 million, according to the China Association of Collectors.

Last year, 46.1 billion euros ($61.4 billion) was spent worldwide on Chinese antiques, according to the annual report of TEFAF, the world’s largest art and antiques trading market, in the Netherlands.

Real collectors rarely become victims of the chaotic trading situation, said Liu Shangyong, general manager of Rongbao Auction Co in Beijing. “Only those who dream of making a quick fortune through collecting are at risk.”

When a famous painter’s works become widely admired and sought after, a flock of forgers won’t be far behind, speedily producing fake new works.

For some types of artworks and antiques, most of the counterfeiters are rural peasants, Wang said, and, all of the residents of a village might be involved in making the works.

In some places, the craftsmen’s techniques of earlier dynasties have been passed down from generation to generation. They might be the origin of some internationally known art form, such as Jingdezhen in Jiangxi province, which is known as the capital of porcelain and pottery.

“They take advantage of the riches of locally available raw materials and the traditional working skills,” Wang said, “and they use these to expand the scale of their production.”

Wang said that residents of many places on the map of fake antiques misunderstand the official policies regarding their areas’ arts and crafts.

In Bengbu, Anhui province, people mistakenly feel encouraged to produce fake jade artifacts because the local government promotes the area’s jade culture. The residents think of their counterfeits as part of the jade industry the government promotes, the report said.

“The counterfeit antique pieces are in fact imitations of fine arts with a high level of craftsmanship,” said Liu Shuangzhou, a law professor at the Central University of Finance and Economics. “At the very beginning of the opening-up of tourism 20 years ago, these crafts were sold only as souvenirs of the scenic areas.”

But daydreams about the riches to be had pushed the market in the wrong direction.

Typically, a dealer pays rural artisans less than 100 yuan ($15) for an artwork or artifact. Then, after secondary work on the piece painting or polishing, perhaps the dealer sells the item on the antique exchange market for tens of thousands of yuan, according to the report.

Someone gets buckets of gold, while the counterfeiters often end up in prison.

“The point where it becomes illegal is only after the artifacts reach the market and are traded as antiques,” said Liu. “It is very rare that the dealers in the middle of the trading process would have failed to identify whether an item is genuine or not.

“If they fail to reveal an item as a fake, that violates the law. It is only at that point we can say it is illegal.”

The crime is more severe when the amounts involved reach a certain level, and then the dealers can be sentenced to more than three years in prison, he said.

Of course, they are the ones who benefit the most from the sale, not the rural artisans or skilled craftsman. In the chain of counterfeit production, the dealer or broker benefits the most in the fake art deals, and at the other end of the chain is the unwitting buyer.

“People who dream of getting rich overnight with art investments are targeted by fake-antique dealers,” Liu said. “True collectors don’t get so excited that they invest in an item without gathering the information needed to make an informed purchase.”

Liu also said that the get-rich-quick attitude in collecting has spread everywhere in the past decade. At the peak of the collection fervor in 2008, there were about four prime-time TV programs about appraising and evaluating objects gathered in various places.

The fervor needs to cool down, he said, especially because it has led the market astray. Appraisers are accused of lying for money and auction companies have lost their credibility because of all the confusion.

“Up to now, we don’t have a law specifically aimed at regulating the antique trading,” Liu said, “but we really need to take some action.” 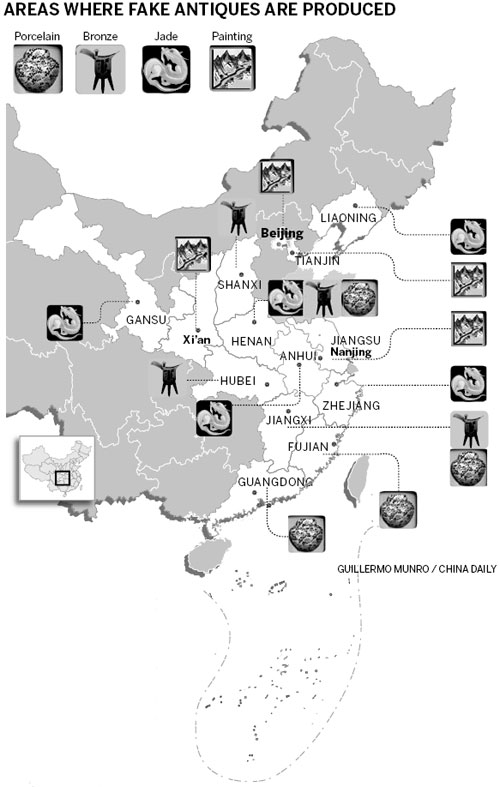