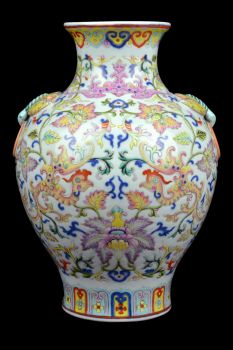 None of the surviving relatives of Houstonians John and Ann Hamilton can remember when or how the couple acquired a gorgeous porcelain vase, though its vibrant array of colors makes it hard to forget.

The next owner won’t have the same problem – the Chinese Qianlong-style vase was sold at auction in Houston on Sept. 20 for $930,000.

The vase, which dates to the Chinese Republic period of the early 20th century, was the premier lot of Morton Auctioneers & Appraiser’s “Asian & Middle Eastern Works of Art,” auction, created from the estates of three families.

In addition to the vase, the auction included a 17th- to 18th-century Sino-Tibetan thangka (a painting on cotton or silk) that sold for $79,000 and a Chinese ink box that fetched $30,500. The total auction sales surpassed $1.1 million, making it Morton’s highest-grossing auction to date.

A marketing campaign in China brought in strong interest and 120 parties led to competitive bidding. The winning bid was registered by a buyer’s agent from Singapore.

“When we received it, we realized it had a large value, but as we did the research we found it was even more than expected,” Morton marketing manager Alec Windle said of the vase. “The value stems from the era and because it was so perfect, not a single flaw or scratch. It’s a rare piece and even more rare to find at auction.”